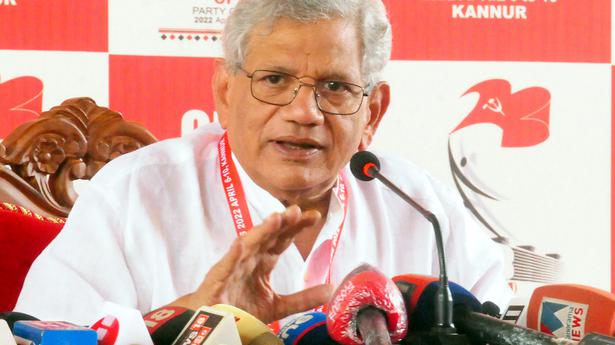 Sitaram Yechury was re-elected general secretary of the Communist Party of India (Marxist) [CPI(M)] at the close of the five-day 23rd party congress here on Sunday.

The reconstituted Polit Bureau, the party’s apex decision-making body, has 17 members, including for the first-time in its 58-year history a Dalit member, Ramchandra Dome, a medical doctor and a seven-time Lok Sabha member from West Bengal.  A truncated, 85-member central committee with 15 women and 17 new faces, was also formed at the party congress which, according to Mr. Yechury, showed a “united resolve to take on the challenges of the present times.”

Besides Mr. Dome, the newly-constituted Polit Bureau has A. Vijayaraghavan, convener, Left Democratic Front (LDF) in Kerala, and Ashok Dhawale, president, All-India Kisan Sabha, who was one of the architects of the farmers’ protest against the now-withdrawn farm laws.

From Kerala, as expected, K.N. Balagopal, P. Rajeeve, C.S. Sujatha and P. Satheedevi made it to the new central committee, while P. Karunakaran, Vaikom Viswan and the late M.C. Josephine got dropped.

While the age limit of 75 years was what led to the exclusion of several existing members, four had died in the past four years. Veteran leader V.S. Achuthanandan, 98, who was retained as a special invitee in the last central committee, was also dropped from the new one.

Addressing the closing session of the party congress, Mr. Yechury said the party was now confident of marching forward with a steely resolve to take on the Bharatiya Janata Party (BJP) and the Rashtriya Swayamsevak Sangh (RSS) in order to protect the Indian secular democratic republic, Constitution, minorities and country’s federal structure. “The party’s links to people have to be deepened,” he said.

The CPI(M), he said, would fight to safeguard the inerasable right of the people to choose their faith.

Exemption from the age rule was granted to Chief Minister Pinarayi Vijayan, who will continue to be a member of the Polit Bureau.

M. Vijayakumar, member of State committee, has been accommodated as member of the central control commission.