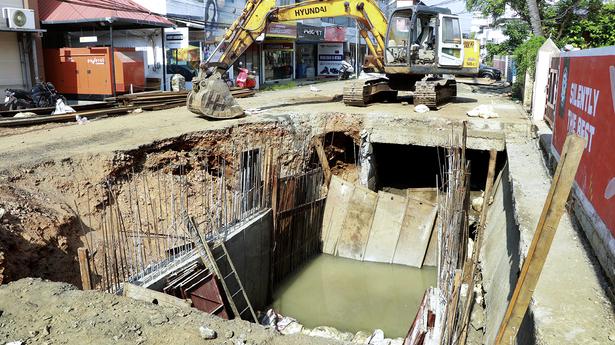 Intermittent summer showers and delay in clearing drinking water pipelines have delayed the Mullassery canal restoration work, raising the apprehension of flooding in the city during the upcoming monsoon season.

Only 10% of the restoration work has been completed though the original proposal was to complete the project by May. With the onset of the south-west monsoon expected by May-end, the canal restoration work is unlikely to be completed. The delay in completing the work before the rainy season is likely to have an impact on the flood situation in the city.

The summer showers had forced the postponement of work on the canal stretch at Fashion Street. The work was to begin on Monday, but was postponed to Wednesday considering the weather situation, said K. C. Manoj, Assistant Engineer of the Irrigation department, who is coordinating the work.

There has been a delay in removing the water supply pipelines laid along the canal. The work on the Fashion Street stretch can be taken forward in full steam only after removing the pipelines. The work on the 150-metre stretch will begin shortly. The canal floor would have to be deepened by one metre in the area, said Mr. Manoj.

The civic authorities said they had earmarked funds for the removal and restoration of pipelines. The Kerala Water Authority (KWA) was asked to identify the pipelines laid through the canal. It was later found that a sewage canal was also laid along the canal. Once the KWA came up with an estimate for the removal of pipelines, the funds would be released, said Mayor M. Anilkumar.

Though the funds for replacing the pipelines were not included in the Mullassery canal project, the Kochi Corporation took the effort for raising it. The council would offer all possible support for the project, he said. A meeting would be held in the Mayor’s chamber on Wednesday to review the progress of the work and necessary steps would be initiated based on the discussions, he added. Ban on plastic: What will vendors do