Celebrate Tamil New year with a kolam, a tradition that has endured and evolved over centuries of culture, across mediums like gold, pearl, rice and now, puzzle blocks

Celebrate Tamil New year with a kolam , a tradition that has endured and evolved over centuries of culture, across mediums like gold, pearl, rice and now, puzzle blocks

“I remember my grandmother telling me that when independent India was announced, women of Madras decorated entire roads in Triplicane and Mylapore with large kolams to celebrate,” says Chennai-based historian Meenakshi Devaraj. The academician pauses mid-conversation, mulling over the varied socio-political, cultural and ritualistic roles played by kolam over centuries.

The journey of kolam is an interesting one, from a humble agrarian offering in the Sangam period, to its role in ethnomathematical research and edu-games in the 21st Century.

“This practice started as a bali [offering] when we were an agrarian community. Our produce was mainly paddy, so people would put an offering of paddy at the entrance of homes and commercial spaces everyday. After some time, this turned into offerings of rice. This is mentioned in the texts of Sangam literature, dating back over 2,000 years. In my own research, I found that this ritual slowly evolved into the format of kolams by the 8th or 9th Century,” Meenakshi says.

A kolam made brighter with flowers

It was in the 8th Century, she says, that people truly started to get creative with the kolam: “It took on other versions, besides the patterns made out of rice flour. The habit of making kolams out of flowers began then, as did the panchavaranam: a five-coloured kolam in black, white, red, yellow and green.”

For the powers that be of that era — such as kings and wealthy merchants — special occasion kolams meant patterns drawn with powdered gold and pearl powder. “An actual reference comes in a literary work called Seevagasinthamani, in the description of king Seevagan’s wedding ceremony. All this happened in the 8th Century,” says Meenakshi.

From the common man’s perspective, she adds, “Apart from mentioning kolams done in front of houses and ritual places, Tamil literary works also talk about kolams done in the kitchen before cooking, and in places where food was served. This shows the respect they had for these places.”

Today, the kolam has evolved, but there is plenty that has still remained unchanged over centuries. For instance, the traditional morning and evening kolam ritual of Tamil Nadu — cleaning the floor, sprinkling water, sometimes adding cow dung paste as a background, and then drawing a white pattern using rice flour — is described almost exactly the same in the 9th Century, in Alvar saint Andal’s collection of verses Nachiar Thirumozhi.

Symmetry and mathematical interpretations involved in the kolam have attracted the attention of researchers studying the science of ethnomathematics. “This subject deals with the relationship between mathematics and cultural practices. I have had people approach me from multiple countries, for their research,” she says.

The role of kolams today extend beyond rituals and academics. From environmental statements to politically charged kolams, it is as much a part of today’s social fibre as it has ever been. The kolam is also used as a parenting and educational tool, in the form of a tabletop game.

Coimbatore-based toy designer Kanaka Ananth’s games like Rangolia and Krazy Kolam have been garnering attention ever since their launch last year. The latter, particularly, is handcrafted with wood and can be played like blocks or puzzles, with different small motifs and shapes that can be arranged to form a variety of patterns. Originally designed for children above the age of three, the game surprisingly generated interest among homemakers and grandparents as well, both as a stress-buster and to beat boredom.

“The beauty of it is in how last year, people started using our kolams for Navaratri golu and Deepavali decorations. Soon after that, I was approached by some grandmothers to create a bigger, more complex set that they could play. So we came up with Krazy Kolam Plus in January this year: it has 40 pieces and a booklet, so they can make more complex patterns,” says Kanaka, whose original idea was to encourage creative thinking among children.

Now that grown-ups are enjoying it as well, she is happy to see the tradition having come full circle. Her elderly customers, who embraced this shift from tradition to innovation, seem just as happy. 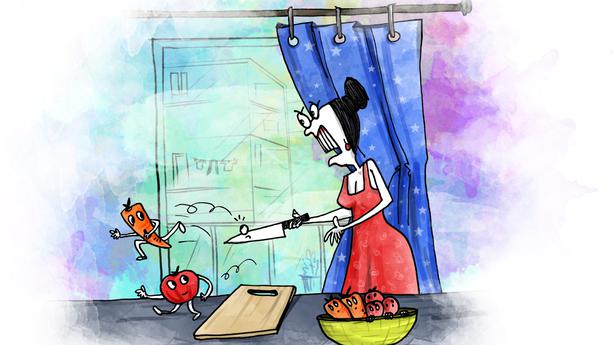 The ‘The Making of Heroes: The Adventures of Zoe and Scruffy’, incorporates topics such as divorce, adoption and gender neutrality