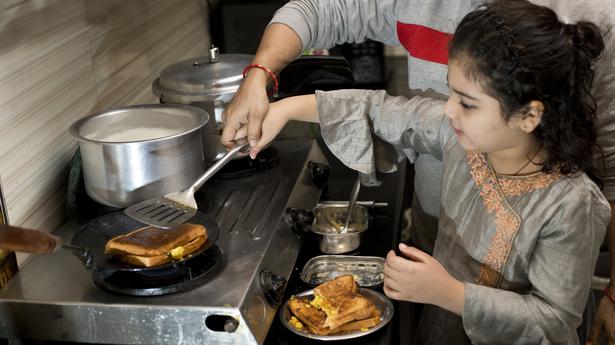 ‘Come summer, I would ask for a taller box of sandwiches, to be able to take more than the usual two’

‘Come summer, I would ask for a taller box of sandwiches, to be able to take more than the usual two’

One fine day in the early ’70s, my generation of urban kids and their mothers took to sliced white bread as if it was the one thing that had been missing from their lives for generations. I suppose it was, really.

And when it arrived, it knocked out all other nutritious and home-grown school-tiffin options from many a home. My older siblings may have a dim memory of being given poha, upma, sabudana khichdi, chappati roll, but by the time I came along, metal tiffins had been rapidly replaced with plastic ones. And white bread had stolen a march over a lot of the indigenous fare.

There we were then, walking the school compound during the 15-minute recess, or sitting in tight little cliques — we were perhaps the forerunners, the precursors, to later generations of mean girls — playing out subtle tactics of inclusion and exclusion. Everyone had one thing in common though: the tiffin box was held in a certain way. The lid was always placed at right angles to the bottom. I don’t know who taught us — school parampara perhaps. This was maybe a carry-over from the days when eating in public was a self-conscious and rare thing. So you positioned your food in such a way that it was not in the direct line of vision of anyone. The lid served as a shield — from what? Hungry eyes? Prying eyes? Evil eyes?

No one is self-conscious about eating in the open anymore. That fell by the wayside some decades ago. In our and other families, eating something while walking home from school or out on a stroll was considered wanton, brazen, shameless, hoggish, mannerless, craven — you choose the adjective. Maybe a kinder catch-all word would be ‘inappropriate’. But our mothers were not prone to using kinder words. ‘Even dogs take their food to the side and eat it, and don’t walk along and chat with friends khaat-khaat (while eating),’ we were told. To which, if you were in the mood to start a thrust-and-parry with an elder, you might come up with the argument that the buffaloes walking on the road to the nearby pond most certainly walked khaat-khaat. To which you could deftly be put down with an ‘Ok, then be a buffalo’.

But I digress. Some of us became confirmed jam-and-breaders. Every school day. And so, a great barter system then fell into place. In some homes, bread had been kept firmly out. My South Indian friends still got airy idlis and two delicious chutneys, my North Indian classmates brought layered wheat parathas with a piece of pickle that sent out saunf and onion-seed aromas even before the dabbas could be opened; there was a smattering of luchi-aloo carriers too. As all of them hankered for jam-and-bread (always with that startlingly vermilion-coloured ‘mixed fruit’ jam), while we were hallucinating about idlis and parathas before the recess bell went — the barter worked for us all.

Come end-March and April, I would ask for a taller box of sandwiches, to be able to take more than the usual two. Jam-and-bread would be pushed aside by a seasonal, more Indian, avatar. Raw mango and white onion chutney sandwiches. The white onions at that time would come into the market in great big hanging bunches from Alibaug to our suburb of Chembur, Mumbai. A recent visit to Alibaug saw me coming home laden with them. But they’re available everywhere in the season, now.

My mother would make this sensational chutney in her newly-acquired Rico Mixer — a little tornado of a dry and wet grinder. The previous night, she would have taken a week’s worth of top-of-the-milk cream (malai) which she had collected in the fridge, and added a dollop of curd (dahi) to it, keeping it out to set overnight, like you would any homemade yoghurt. In the morning, she would churn it (hand-mixers had not come yet, she would use a wooden churner) with some cold water. Snow-white butter would rise to the top, leaving delicately soured buttermilk below.

At the risk of sounding most parochial and starting a riot, I have to add here, that this kind of butter, for me, wins hands down over the Coimbatore one, and any other contenders from any maakhan-chor region. And, of course, commercial yellow butter just will not do, in this particular sandwich. (In a word: Meh.)

The sandwich is then assembled so: A generous portion of white butter that has been drained well of its water content by hand, so that it does not make the bread soggy, is spread on one slice of (unabashedly) white bread. Then a nice thick patina of kairi chutney is spread on the other slice. They are both put together. An open and shut case.

For the few weeks of school before the summer holidays began, the prospect of eating those sandwiches seriously interfered with our ability to imbibe the 3 Rs before recess. On top of it all, the appearance of raw mangoes hijacked any scholastic leanings we might have had, by inserting the thought bubble: if kairi is here, can aam be far behind?

1 tsp oil of your choice

1. Put into a grinder, kairi, with the skin, if your grinder is good, peeled if it is not. Discard the stone or seed part.

2. Add the chopped white onion, or red if white is not available.

3. Add the gud or jaggery, broken.

5. Salt to taste — I like to use the ‘khaday-meeth’ crystals — and the mango-pickle powder if available.

7. Twirl in mixer by pulsing, and this way keeping it slightly grainy and not completely pasty.

8. Temper with mustard seeds popped and crackling in heated oil.

(This chutney tastes fantastic atop khari-biskoot, inside a chappati roll, with rice, with bread sticks, crisps, cutlets, vegetable wedges… and even if you’re horribly healthy in your eating habits, do try it with white bread and white butter. Add some sliced cucumber or lettuce if you insist on a healthy twist.)

The writer is a novelist, counsellor and music lover.