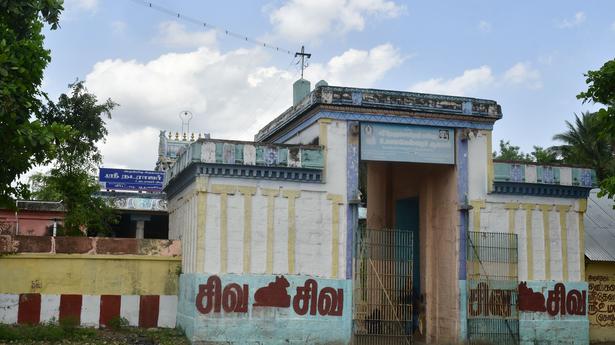 Besides housing the temple built by Raja Raja Chola’s grandmother, Konerirajapuram is the birthplace of Carnatic musician Vaidyanatha Iyer

Besides housing the temple built by Raja Raja Chola’s grandmother, Konerirajapuram is the birthplace of Carnatic musician Vaidyanatha Iyer

A narrow road hemmed in by paddy fields detaches the village from the hurly-burly of the Kumbakonam-Karaikal Road. A pair of peacocks leisurely cross the road and enter paddy fields covered with the remnants of the stalk after the harvest. The pond in front of the Umamaheshwarar temple has dried up. Only the chirping of birds, particularly the train rattle of peacocks, disturbs the eerie silence of Konerirajapuram in Mayiladuthurai district, which has a unique place in the Tamil Bhakti Movement, iconography, wall paintings, and the carnatic music.

Referred to as Thirunallam in the inscriptions and in the hymns of Saivite saints Thirunavukkarasar and Thirugnanasambandar, the temple in Konerirajapuram, constructed by Sembiyan Madevi, the grandmother of Raja Raja Chola, the greatest among the Chola King, is also the abode of the tallest Nataraja idol, made of bronze.

“There is an inscription and stone carvings depicting Sembiyan Madeviyar, with a garland in her hands, worshipping Lord Siva in the temples,” explains Thangam Thennarasu, Minister for Tamil Official Language, Tamil Culture and Archaeology, who also holds the Industries portfolio.

The inscription says Madevadigalar, alias the glorious Sembiyan Madeviyar, constructed a stone temple in the “sacred name” of her husband, the glorious Gandaraditya Devar, when her illustrious son Madhurantaga alias Uttama Chola was ruling.

“This is the first brick temple that was converted into a stone structure by Sembian Madeviyar in 972 AD in the third year of the rule of Uttama Chola,” Mr. Thennarasu explained.

The temple had received grants almost every year during Uttama Chola’s reign and there is a legend behind the 9-feet bronze Nataraja idol. It is believed that Lord Siva and his consort Parvathi came to the temple as an old man and his wife and drank the “melted metal” kept by the sculptor to make the idol and transformed themselves as Nataraja and his consort Sivakami. The sculptor, who could not visualise an ideal image of Nataraja was in a frustrated mood, and had asked them to drink it when they had approached him for water to quench their thirst.

S.R. Balasubrahmanyan, the author of Early Chola Temples, had said that apart from the Madras Government Museum and the Tanjore Art Gallery, the richest and largest number of bronzes of south India, among the finest of them all, are found in the temples at Konerirajapuram and Tiruvenkadu. “The large size Nataraja and his consort, unique for their size and execution, should be assigned to the middle Chola period,” he had said.

The temple also has featured paintings on the walls and roofs. “The particular painting of the procession of the deity on a festival day is captivating. It gives us a glimpse into festival settings at the beginning of the 20th century, the dress worn by people on the day, the musicians, dancers, and others,” said Mr. Thennarasu, expressing his desire to restore the paintings that are on the verge of destruction.

“As the hall was fully crowded, I could not reach the concert stage. It was then Bhagavthar was proceeding to do ‘neraval’ in Gopalakrishna Bharathi‘s Kambhoji-raga composition ‘ Tiruvadi Saranam’. Somehow, I managed to wade through the crowd and sat near the dais. I was absorbed by the music. This was not music for the ears but for the soul. There was absolute silence in the audience and I shed tears of joy. It was a turning point in my life,” recalled Sivan, who stayed with Vaidhyanatha Iyer for many years.

Sivan had narrated many such concerts that bore testimony to the greatness of Vaidhyanatha Iyer’s music.

According to Mudikondan Venkatrama Iyer, one of the disciples of Vaidhyanatha Iyer, while most artistes are masters of one or two of different aspects of Carnatic music such as ‘alapana’, ‘kriti’ singing, ‘neraval’ and ‘swaram’, he was adept at all.

“His ‘alapanas’ were always leisurely and elaborate. His ‘madhyama kala niraval’ needs to be mentioned specifically. His ‘swara’ singing was known for its structured development in terms of raga ‘swarupa’. As mentioned before, he was a master of ‘pallavi’ singing,” said Venkatrama Iyer in the Deepavali issue of Ananda Vikatan in 1953.

Musician and writer Rangaramanuja Iyengar had captured the personality Vaidhyanatha Iyer thus: “He was the acknowledged leader in the field. Thirukodikaval Krishnaier, who poured ridicule on his crackling voice, now hailed him as a hero. Mayavaram Subbaier and Govindaswamy Pillai, Dakshinamurthy and Azhagunambi and Palani Krishnier and Konnakol Pakiri deemed it an honour to accompany him. Madurai Pushpavanam, who was frequently in the audience, was so overwhelmed by the music that he was seized with fear that he could never open his mouth again and sing.” Vaidhyanatha Iyer died in 1921 at the age of 41.