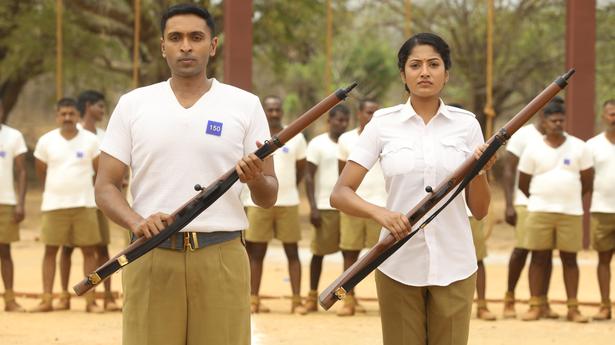 Director Tamizh, instead of resorting to the usual Tamil cop drama cliches, is keen on critiquing the police system through a sober story set in a training camp

Director Tamizh, instead of resorting to the usual Tamil cop drama cliches, is keen on critiquing the police system through a sober story set in a training camp

When a cat in the monastery kept making noises during the evening meditation, the Zen master asked his disciples to tether it to a wall. They began doing this every evening to prevent the cat’s disturbances. This practice continued, even after the master passed on. Then, the cat passed on. But it was replaced with another cat to continue the practice.

This popular Zen tale illustrates the absurdity that can result from following orders unquestioned. There is a cop in Taanakkaran who is much like the ritual cat. He stands guard over a tree inside a police campus because, years ago, when the tree was a sapling, a superior cop had ordered one of his subordinates to guard it against goats. Unlike the cat story, here, the people involved are aware of the absurdity. Yet they never challenge the status quo, as they are a part of a system that abhors questioning and appreciates obedience.

Tamizh, who has written and directed the film (his first), before starting the story, gives a brief explainer about the Indian police system, which was created by the colonial regime to serve its interests, but has continued to be hierarchical, and sometimes even inhumane. Tamil filmmakers usually resort to making their cops as testosterone-charged, trigger-happy vigilantes, who are immune to laws of physics and human rights violations . Tamizh, instead of resorting to this good-cop, bad-cop game, is keen on critiquing the system through a sober story set in a police training centre.

The training camp setting itself is new to Tamil cinema cops, whom we usually see outdoors or in police stations. The camp, located in Pozhilaru, Tirunelveli, in 1998, is a character in itself. It has a barren parade ground, parched under the sun, without a smidgen of shade. The trainees’ rooms pale in comparison with prisons. Their toilets can be claustrophobic. And, the ratio of trainees to toilets is about 70:1.

The facilities at the camp, however, are not as unforgiving as one of its training officers, Eshwaramurthy (played by Lal). He is someone who likes discipline… or rather, who likes to discipline. Though he is not the most superior officer, he has a reputation for being ruthless. Arivu (Vikram Prabhu), one of the trainees, questions his authority (albeit unintentionally). This sets up the film’s conflict well: the face of the system that hates being questioned versus the one who questions.

Tamizh, however, does not make Arivu a typical mass hero. Unlike other commercial cop flicks in Tamil, the heroism of Arivu does not lie in his charisma but in his perseverance. There are no screaming punchlines, just silent resilience. We also get a solid flashback that explains his motivation to endure.

Vikram Prabhu fits this role well. The only bits that were jarring with respect to his character were a couple of scenes when the character becomes a tad melodramatic. The romantic angle with Anjali Nair, who plays an officer at the camp, does not lead anywhere and could have been done away with. In fact, a mushy song kills the gritty mood of the intense camp setting. The casual body-shaming of another character was also a buzzkill in a movie that strives to discuss what is right.

Despite having a sole protagonist, the secondary characters get ample screen space as well. And, most of the actors do a fine job, especially MS Bhaskar as a cop who has been wronged by the system but has to remain subservient to it.

Lal’s character is more interesting. He appears a bit unidimensional at the beginning but as the film progresses, we realise he too but a cog in the wheel. In the end, Arivu realises he isn’t battling an individual but a century-old system. Even the ckimatic sense of triumph is subdued in Tamizh’s promising debut. The hero cannot defeat the system but he can make it a bit better.

‘Taanakkaran’ is streaming on Disney+ Hotstar