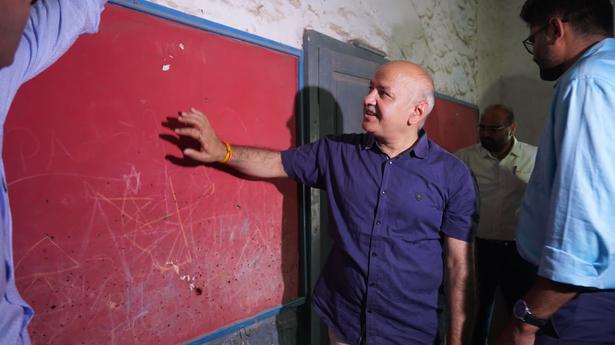 Delhi’s Deputy CM and Education Minister Manish Sisodia on Monday took the Aam Aadmi Party (AAP)‘s public debate with the Bharatiya Janata Party over quality of education in Gujarat to the next level with a visit to a government-run school in Gujarat’s Education Minister Jitu Vaghani’s constituency.

Mr. Sisodia visited government schools in Bhavnagar district in Gujarat to “check” the standards in the State. Earlier, he had publicly challenged his Gujarat counterpart to a debate on the quality of education in Delhi and Gujarat.

AAP, buoyed by its spectacular success in Punjab and modest gains in Goa in the recent round of Assembly elections, is eyeing BJP-ruled States such as Gujarat and Himachal Pradesh where the Opposition Congress is perceived as not being strong enough to upset the ruling party in upcoming State polls.

With some success in civic polls in Gujarat already in the bank, AAP has set its gaze on the education sector in Gujarat, the home State of Prime Minister Narendra Modi and Home Minister Amit Shah, to take on the BJP government ahead of the Assembly polls later this year.

After his visits to two schools where he interacted with students and teachers, he took to social media to share a series of pictures of the educational institutions and slammed the “Gujarat education model” and the BJP regime in the State.

“This is the education model of the BJP in Gujarat, which it has developed in 27 years,” the Delhi Education Minister tweeted along with pictures of the schools he visited accompanied by AAP Gujarat leaders and mediapersons.

Mr. Sisodia claimed that he spotted cobwebs in the schools “which had no floors, let alone desks for the students”. He also shared pictures of toilets of the schools he visited, saying that their condition was such that one could barely stand there for a minute.

“How can a teacher stay in the school for 7 hours and teach children?” he stated in his Twitter posts which were retweeted by AAP and Delhi Chief Minister Arvind Kejriwal from their official handles.

“It’s 75 years since we became  independent and yet we could not afford a good education. Why? If each child doesn’t get the best education, how will India progress?” the Delhi Chief Minister wrote while commenting on his deputy’s Twitter posts.

After Mr. Sisodia’s visit, AAP’s official Twitter handle juxtaposed pictures of then U.S. President Donald Trump’s wife Melania meeting students of Delhi government schools in 2020 with Gujarat government schools to illustrate how Delhi schools are better compared to the ones in Gujarat.