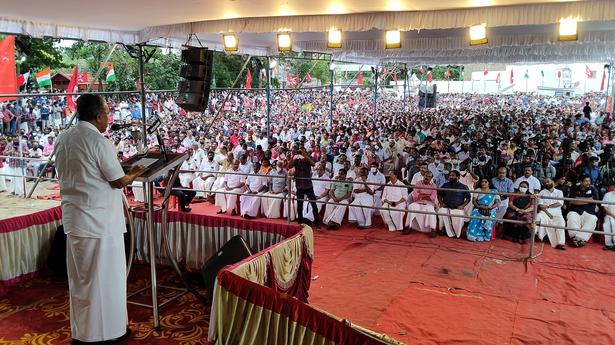 Sounding a word of caution against “certain communal organisations who are out to oppose all developmental projects and destroy peace in the State”, Chief Minister Pinarayi Vijayan has said the SilverLine semi high-speed rail project is important for the all-round development of Kerala.

He was addressing the first public meeting as part of a Statewide campaign to garner support for the rail project. The meeting was organised by the Left Democratic Front (LDF) in the capital city on Tuesday.

“We have not forgotten how certain communal forces have attempted to oppose major projects in the past. They had attempted to halt the survey for National Highway expansion and the GAIL pipeline project. Now, they are murdering people in an attempt to strengthen their position. The government has taken an uncompromising stand towards such communal forces. The public have to remain vigilant against their attempts to create divisions,” he said.

Mr. Vijayan sought to compare the ongoing protests against the SilverLine project to the liberation struggle against the first Communist government led by E.M.S. Namboodiripad.

“The State’s stellar record in human development indices were achieved as a result of the land reforms and education reforms undertaken by the EMS-led government. We all know the history of how some forces claimed that this is something that will destroy our State, as they claim now. That protest grew into the biggest anti-democratic struggle ever witnessed by the country. The right wing in Kerala never stood for the State’s progress. Rather, they have a tradition of opposing all such initiatives,” he said.

Pointing a finger at the Union government, he said the Centre had been supportive of the SilverLine project till 2021, with it being mentioned in the Union Budget Speech that year, it being included in the National Infrastructure Pipeline, and also mentioned favourably in communications from Union Ministers to the State government. However, all this changed when the LDF came back to power last year. Since then, non-existent problems were being highlighted to stall the project, he said.

He said the development of the existing railway line would not result in any savings on travel time, pointing out that there had been no noticeable improvement in the time taken on the Thiruvananthapuram-Mangaluru route, even though only 19 kilometres was left to be widened. To straighten out the 626 bends along this route would need large amounts of land acquisition in thickly populated areas. Kerala had faced major neglect from the Union government as far as railway development was concerned, he said.

The current state of all the projects that were announced in the past was enough to provide this, be it the promise regarding the railway zone or the development of various stations, he said.

Mentioning the compensation package for various categories as part of land acquisition for the project, the CM reiterated that the experiences of those who had given up land for various projects under the LDF government were testimonies to the government’s stand. Carbon emissions and fossil fuel usage would fall considerably, making it a highly environment-friendly project. The claims that embankments would create flooding were unscientific, as the entire railway line in the State was built on embankments.

Communist Party of India (CPI) State Secretary Kanam Rajendran, who presided over the meeting, called on the people to correct the Opposition parties, who had taken a stand against the development of the State. He said that the mainstream media, which in the past stood for development, should have an introspection on whether they should oppose such a project. Leaders of the various constituent parties in the LDF also spoke. Kalpathy in festive mood as cars of Siva, Ganapathy, Murugan roll out