President Joe Biden is set to announce plans Thursday to send additional military aid to help Ukraine fight back against the Russian invasion, according to a U.S. official. The new package is expected to be similar in size to the $800 million package Biden announced last week.

A top ally of President Vladimir Putin said Russian forces will seize the last main stronghold of resistance in the besieged city of Mariupol on Thursday, after Ukraine proposed talks on evacuating troops and civilians there.

Meanwhile,  the Luhansk governor said Russian forces now control 80% of the region, which is one of two regions that make up the Donbas in eastern Ukraine.

Ukraine’s General Staff said Thursday in their morning update that the Russian forces continue the offensive in the east of the country with the goal of establishing full control over the Donetsk and Luhansk regions.

The Ukrainian forces in the two regions have repelled nine Russian attacks over the past 24 hours, destroying one tank, 10 armored units and two vehicles, one artillery system, two special engineering units, an anti-aircraft missile system and an ammunition depot, according to the update posted on the General Staff’s Facebook page.

The Russian military also continue “to launch missile and bomb strikes on military and civilian infrastructure throughout Ukraine,” the General Staff said.

In the southern Kherson region, which Russia has claimed to fully control, the Russian military “plan to organize the forced mobilization of the population for war with Ukraine,” as well as cut off “humanitarian support of the region from the Ukrainian authorities,” the General Staff said.- AP

A top ally of President Vladimir Putin said Russian forces will seize the last main stronghold of resistance in the besieged city of Mariupol on Thursday, after Ukraine proposed talks on evacuating troops and civilians there.

Mariupol would be the biggest city to be seized by Russia since it invaded Ukraine eight weeks ago in an attack that has taken longer than some military analysts expected, seen over five million people flee abroad and turned cities to rubble.

“Before lunchtime, or after lunch, Azovstal will be completely under the control of the forces of the Russian Federation,” Ramzan Kadyrov, the head of Russia’s republic of Chechnya, whose forces have been fighting in Ukraine, said of the steel plant.

The southeastern port city of Mariupol has endured the fiercest fighting of the war as besieging Russian forces try to take full control. Its capture would be a big strategic prize and would link territory held by pro-Russian separatists in the east with the Crimea region that Moscow annexed in 2014.- Reuters

Cyprus is moving to strip citizenship from another four Russians who appear on the European Union’s updated list of sanctions imposed following Russia’s invasion of Ukraine.

The Russians received Cypriot passports under the country’s once lucrative citizenship-by-investment program that was scrapped in 2020 following an undercover TV report that allegedly showed the parliamentary speaker and a powerful lawmaker suggesting they could skirt the rules to grant a passport to a fictitious Chinese investor supposedly convicted of fraud.- AP

Russian forces are advancing from staging areas in Donbas towards Kramatorsk, which continues to be hit by rocket attacks, a British military update said on Thursday.

High levels of Russian air activity continue as it seeks to provide close air support to its offensive in eastern Ukraine, and to suppress and destroy Ukrainian air defence capabilities, the UK Ministry of Defence tweeted in a regular bulletin.

“Russia likely desires to demonstrate significant successes ahead of their annual 9th May Victory Day celebrations. This could affect how quickly and forcefully they attempt to conduct operations in the run-up to this date,” the tweet added.- Reuters

Evacuees wait before boarding a bus to leave the city during Ukraine-Russia conflict in the southern port of Mariupol, Ukraine on April 20, 2022.
| Photo Credit: Reuters

President Volodymyr Zelensky said Wednesday that Russia’s full attack on Ukraine’s east and south is as cruel as it could be to produce even a small victory.

Speaking in his nightly video address, he said the battles for Mariupol, Kharkiv, Mykolaiv and other eastern and southern cities “will decide the fate of our people and the fate of our freedom.”

“The situation in the country’s east and south remains maximally cruel. The occupiers won’t leave out any attempt, in their large-scale offensive, to score any kind of victory that they could feed to their propagandists,” he said.

Mr. Zelensky said his government is working “24/7” to get Western countries to expedite arms shipments, and that he’s “very happy to say, with guarded optimism, that our partners have started to better understand our needs.” He added that the aid is coming “not in weeks, not in a month, but quickly, now, when Russia is trying to activate its attack.”- AP

US set to send more military aid to Ukraine

President Joe Biden is set to announce plans on Thursday to send additional military aid to help Ukraine fight back against the Russian invasion, according to a US official.

The official, who was not authorised to comment publicly and spoke on the condition of anonymity, said Mr. Biden will deliver a Thursday morning address at the White House detailing his plans to build on the roughly $2.6 billion in military assistance the administration has already approved for Ukraine.

The new package is expected to be similar in size to the $800 million package Mr. Biden announced last week.

It includes much needed heavy artillery and ammunition for Ukrainian forces in the escalating battle for the Donbas region of eastern Ukraine.- AP

‘Days or hours left’: Russia tightens the noose in Mariupol

Russian forces tightened the noose around the defenders holed up Wednesday in a mammoth steel plant that represented the last known Ukrainian stronghold in Mariupol, as a fighter apparently on the inside pleaded on a video for help: “We may have only a few days or hours left.”

With the holdouts coming under punishing new bombing attacks, another attempt to evacuate civilians trapped in the pulverized port city failed because of continued fighting.

Meanwhile, the number of people fleeing the country topped 5 million, the Kremlin said it submitted a draft of its demands for ending the war, and the West raced to supply Ukraine with heavier weapons to counter the Russians’ new drive to seize the industrial east.- AP

A senior U.S. defense official says training of Ukrainian personnel on American 155mm howitzers has begun in a European country outside of Ukraine, kicking off an effort to enable the Ukrainian army to use newly supplied U.S. artillery in the escalating battle for the Donbas region of eastern Ukraine.

The official, who spoke on condition of anonymity to discuss internal U.S. assessments of the war, said the first of 18 promised U.S. 155mm howitzers arrived on cargo flights to Europe on Wednesday and more are on the way.

The artillery systems are to be moved overland directly into Ukraine; the training of Ukrainian personnel is being done on other 155mm howitzers elsewhere in Europe, the official said.- AP

The Luhansk governor said Russian forces now control 80% of the region, which is one of two regions that make up the Donbas in eastern Ukraine.

One of Russia’s stated goals is to expand the territory in the Donbas under the control of Moscow-backed separatists.

Before Russia invaded on Feb. 24, the Kyiv government controlled 60% of the Luhansk region.

Gov. Serhiy Haidai said the Russians, who renewed their offensive this week in eastern and southern Ukraine, have strengthened their attacks in the Luhansk region.- AP

A senior Kyiv official on Wednesday accused the International Committee of the Red Cross of working “in concert” with Russia in Ukraine, a charge the organisation denied.

Ombudswoman Lyudmyla Denisova decried ICRC’s announcement last month that it was planning to open a branch in Russia’s southern Rostov region to help Ukrainian refugees, who, Kyiv says, have been forcibly deported to Russia.

“The International Red Cross is not fulfilling its mandate, I am certain of that,” Denisova said on Ukrainian television Wednesday after meeting with the head of the ICRC’s Ukrainian branch.

Citing data from the United Nations, Denisova said that some 550,000 Ukrainians, including 121,000 children, have been taken to Russia during the course of the war, but Kyiv has no information on who these people are and where they are being kept.

“Where are they? In filtration camps? In temporary facilities?” Denisova asked.

The official said she had asked both her Russian counterpart Tatyana Moskalkova and the ICRC for help in getting information on these refugees so that Ukraine could facilitate their return home, but had received “zero answer from her or from the Red Cross”.- AP

British Prime Minister Boris Johnson said any peace talks over Ukraine are likely to fail, as he compared holding talks with Russian President Vladimir Putin to negotiating with a crocodile.

Johnson said dealing with Putin was like “a crocodile when it’s got your leg in its jaws” and said it was vital that the West continues arming Ukraine.

The prime minister was speaking as he headed to India, where he will encourage his counterpart Narendra Modi to end its neutrality over the war in Ukraine. He played down the likelihood that India would end its longstanding ties with Russia.

“It is very hard to see how the Ukrainians can negotiate with Putin now given his manifest lack of good faith,” Johnson told reporters. “His strategy, which is evident, is to try engulf and capture as much of Ukraine as he can and perhaps to have some sort of negotiation from a position of strength.”- Reuters

G7 finance ministers said they have provided and pledged together with international community additional support to Ukraine exceeding $24 billion for 2022 and beyond, adding that they were prepared to do more as needed.

In a statement, the ministers said they regretted Russia’s participation in international forums, including G20, International Monetary Fund and World Bank meetings this week.

“International organisations and multilateral fora should no longer conduct their activities with Russia in a business-as-usual manner,” the ministers said.- Reuters

President Joe Biden on Wednesday lauded U.S. military officials for “exceptional” work arming Ukraine as he gathered the nation’s military brass for their first in-person group meeting at the White House of his presidency.

Biden has already approved more than $2.6 billion in military assistance for Ukraine since Russia launched its invasion on Feb. 24. He is expected to announce additional security assistance, including artillery and ammunition, in coming days.

The United Nations’ refugee agency says that more than 5 million people have now fled Ukraine since the Russian invasion began on Feb 24.

The Geneva-based UN High Commissioner for Refugees on Wednesday put the total number of refugees at 5.01 million.

Russian players to be barred from competing at Wimbledon: report

Russian players will not be allowed to compete at Wimbledon this year due to Moscow’s invasion of Ukraine, according to a report in sports industry news site Sportico on Tuesday.

Earlier this month, the All England Lawn Tennis Club (AELTC), which organises the grasscourt Grand Slam, said it was in talks with the British government on the participation of players from Russia and Belarus. 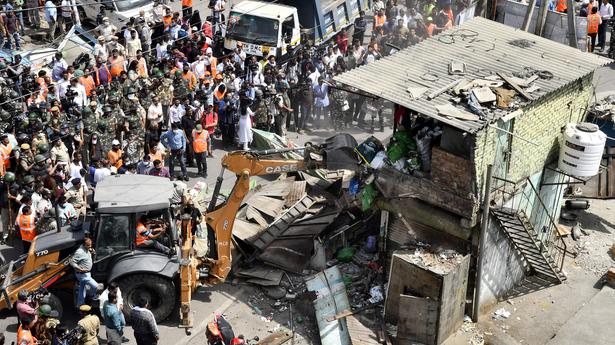 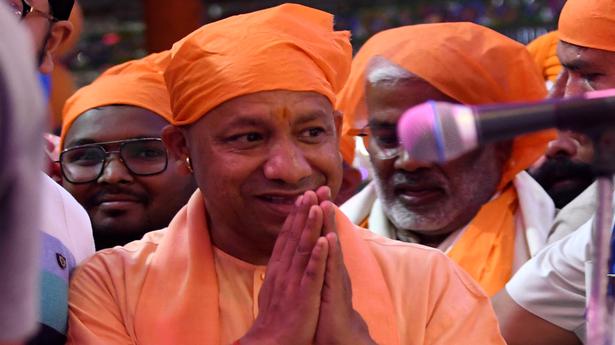 Panchayats to be centres of development, will not face dearth of funds: Yogi 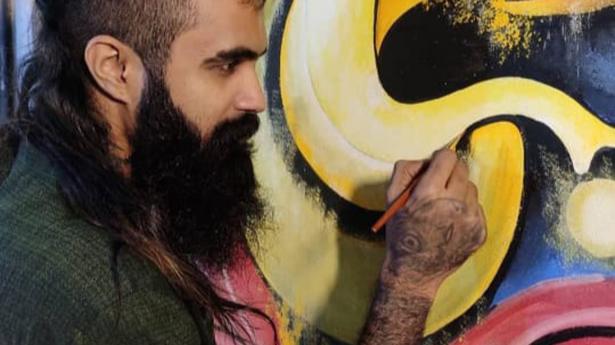