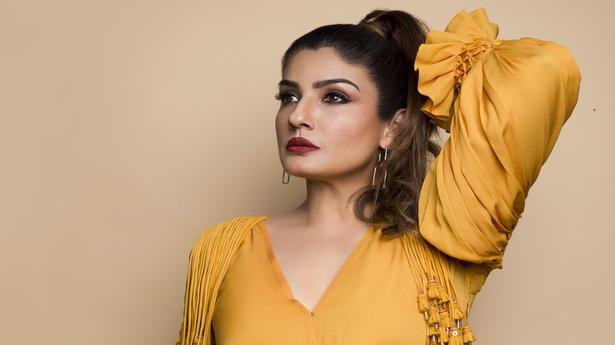 The actor on being part of ‘KGF: Chapter 2,’ why language is never a barrier for her, and working with the biggest actors across the country

The actor on being part of ‘KGF: Chapter 2,’ why language is never a barrier for her, and working with the biggest actors across the country

“It is no longer about the south and north film industry, our films are becoming pan-Indian and I’m proud of it,” says Raveena Tandon, who will be seen in the second chapter of the much-awaited film  K.G.F.

She doesn’t see it as an ephemeral phase or a competition with Bollywood . “I don’t believe in the idea of ‘woods’. It is a farcical nomenclature for our hard-working industry. We are now a united and integrated industry that has become a stronger force to reckon with. There is no competition as the cast and crew from different parts of the country are working together to make the concepts come alive,” says Raveena.

Playing the Prime  Minister of the  country in the Yash-starrer, Raveena reminds  K.G.F is her second Kannada film, after  Upendra which, she says, has become a cult classic over the years. “Language has never been a barrier and I loved the professionalism of the south,” says the actor who has worked with Kamal Haasan and Nagarjuna as well.

Analysing the factors behind the newfound pan-Indian craze of films from the southern states, Raveena says, “I don’t think there have been many cultural differences. The only difference was that in the ‘90s, Hindi cinema was ‘Hollywoodised’. There was too much of western influence, while the films from the south always remained rooted in the culture and told stories that the masses could identify with. Thankfully, the lines have sort of fused now.”

She gives credit to her husband Anil Thadani for distributing behemoths like  Bahubali,  K.G.F, and  Pushpa across the country. Factors like acting styles and face value, she agrees, have become redundant. “Audience in the Hindi belt would not have been thronging to theatres, had they not been accepting the acting styles or identifying with the emotions. They are loving the content-driven cinema but at the same time you can’t deny that Yash, Prabhas and Ram Charan are now pan-Indian names.”

Raveena Tandon in a still from ‘KGF: Chapter 2’

With her performance as Kasturi Dogra in  Aranyak finding popular and critical acclaim, Raveena is on a rebound. “I don’t take total credit for the performance. As a mother and a career woman, I could identify with the  duvidha (dilemma) of Kasturi but when the character is written so well, it becomes easier for the actor to imagine and portray it.” She thanks the diction coach for helping her in imbibing the Himachali accent. The challenge, she says, was to become the character despite all the noise of  Aranyak being Raveena’s OTT debut. “I had refused many offers because they wanted me to play myself. I have always looked for quality over quantity and a challenge before I get bored of the routine.”

Comparing the 90s with the present, Raveena says the streaming universe has broadened the horizons of not just the filmmakers and actors, but also of the audience. “I don’t think in the ‘90s, any commercial film actor would have shown the courage of doing a  Pushpa. In those days, not just the heroines, even the heroes played safe with their image. A little experiment would mean that the film was labeled as off-beat. Watching Allu Arjun, with his unique shoulder and dance movement, is so refreshing,” says the  Aks actor.

Reflecting on her career, Raveena says, though she enjoyed the college romance phase, there came a time in 1998 when she wondered for how long she would keep “wearing the same mini skirt” and “tying her hair in ponytails.” This, she says, was not for changing the perception but for her personal growth. “I am my biggest critic and I am okay with it. I persevered…. that’s the word.”

Suddenly, the  Mohra girl made a smooth shift to films like  Shool,  Daman,  Ghulam-e-Mustafa and  Satta where the characters were not generic. “In  Shool, I was a Bihari housewife, while in  Daman, I was an Assamese who faces marital violence.” But she is always game for a crazy comedy. “When I was doing serious stuff, I was also part of  Chhote Miyan Bade Miya and  Dulhe Raja.”

So, after a series of serious roles, she is again looking forward to a comedy  Gudchadi with Sanjay Dutt. From Amitabh Bachchan to Govinda and Nana Patekar to Manoj Bajpayee and Parambrata Chatterjee, Raveena has worked with actors who hail from different acting schools. “I just react to the energies on the sets. I am very spontaneous. I don’t lock myself up in a room before a serious scene. In fact, you will find me laughing and chirping in a corner.”

Coming from a film family, her father Ravi Tandon made a range of films, as varied as  Zindagi and  Khuddar. “As a child, I was kept out of the film world. The only time we could visit a film set was during the vacations. But, like my father, I love to try different themes.”

In the industry circles, Raveena is known to be a straight shooter and is not a person who would easily say yes to something that is between right and wrong. “In this world, honesty is not always the best policy, but I am brought up that way. With me, what you see is what you get.”

So, there must be something that the Mumbai film industry is not getting right when it comes to mass entertainers? “Whenever I go to Chennai, I always bring  milagai podi, it adds some zing to my idlis!” Well, now we know!