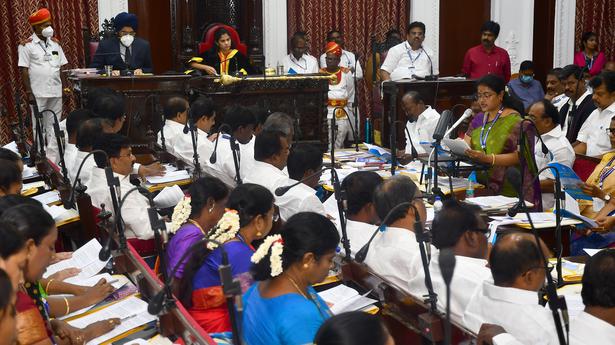 The chairman of the Taxation and Finance Committee Sarbajaya Das presented the Budget with a capital expenditure of ₹2,410.24 crore and revenue expenditure of ₹3,613.35 crore for the year 2022-23. The revenue receipt is estimated at ₹2,824.77 crore.

Professional tax collection is projected to be ₹475 crore in 2022-23. The State Finance Commission grant is expected to be ₹500 crore. The deficit is estimated at ₹363 crore during 2022-23.

Even after the government increased the property tax, the Corporation is expected to net only ₹800 crore from more than 12 lakh properties. A few councillors, including those from the ruling alliance, demanded a rollback of the increase in property tax.

However, after the Budget was passed, the Council passed another resolution inviting objections and suggestions from the members of the public to the proposed increase in property tax. The proposal will result in 50% increase in property tax for a house measuring 600 sq ft in old city areas while the increase would be 25% in the case of properties in added areas. The property tax increase for residential properties with an area of more than 1,801 sq ft will be 150% in old city areas and 100% in added areas.

Owing to a decrease in the Corporation’s own tax revenue, the civic body’s borrowing rose to ₹2,500 crore. The World Bank, the Asian Development Bank and the KfW have given loans to the civic body for infrastructure projects such as stormwater drains.

Public sector banks such as the State Bank of India have chipped in to fund some projects. The interest payment is estimated at ₹148 crore in 2022-23, marking an increase of more than 1,000% in the last seven years.

The Corporation will launch a training for gender equality for 1.31 lakh students in 281 schools in the city throughcricket and dance.

As many as 70 schools will get internet connection and various smart class facilities. Surveillance cameras will be installed under the Nirbhaya fund at a cost of ₹5.47 crore for the safety of schoolchildren. The civic body has allocated ₹6.91 crore to give martial arts training to girl students.

Many of the 64 announcements were based on old initiatives by the previous DMK regime in 2006-11.

Bridges would be built near the bus stand on Usman Road. Another bridge would be constructed at Valluvar Kottam junction to ease traffic congestion. ‘You are Pakistan’s hero’, says Imran Khan as he meets his saviour