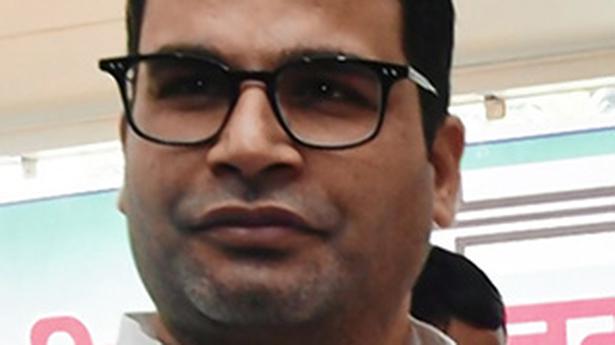 Among the five strategic suggestions for the revival of the Congress made by the poll strategist Prashant Kishor are fixing the leadership issue, and reclaiming the party’s founding tenets.

The presentation to the party leadership also called for solving the alliance conundrum, building an army of grass roots leaders and foot soldiers, and creating an ecosystem for a supportive media and digital propagation.

Over the past few months, the poll strategist is said to have made several presentations, one of which, running into 88 slides, has been accessed by The Hindu. However, people close to the strategist claimed that none has seen the entire presentation that has well over 600 slides.

Mr. Kishor’s formal entry into the Congress is predicated on a committee of senior leaders submitting their report to party chief Sonia Gandhi after examining these proposals. Thereafter, the poll strategist will negotiate his future role in the party with the Gandhis, claimed a source close to the strategist.

On the leadership issue, Mr. Kishor’s presentation pointed out that a non-Gandhi as the party president and Ms. Gandhi as head of the Congress-led alliance would have made high impact but it’s viability is difficult.

That’s why Mr. Kishor gives the preferred option of Ms. Gandhi continuing as the party president, with a non-Gandhi as working president; recommends revival of the Parliamentary Board, with Rahul Gandhi heading it and suggests Priyanka Gandhi Vadra as the general secretary in-charge of coordination.

Another slide pitched Mr. Gandhi as the leader of the Parliamentary party who will have a shadow cabinet, offering “collective credibility”.

Noting that the Congress has been witnessing a steady decline since 1985, both in terms of vote share and Lok Sabha seats, one slide of Mr Kishor’s presentation draws on the six symbols of Nataraja, the dancing form of Lord Shiva, and calls for the reincarnation of Congress .

Create a new Congress that become a choice for masses; protect the party’s legacy and core principles; liberate [the party] from inertia and status quo, destroy the sense of entitlement, sycophancy and lack of accountability; conceal the baggage of nepotism and corruption; and connect with the masses, become their voice and reflect their aspirations.

As reported earlier by  The Hindu, the strategist has suggested the Congress focus on contesting 358 Lok Sabha seats across 17 States alone, 168 seats across five States with regional parties and 17 seats in the NorthEast with smaller partners.

Stressing on the need to target 30 crore voters out of an electorate size of 104 crore, Mr Kishor has proposed a completely new architecture of election management, with an election task force advising the Congress president.

The poll strategist has also suggested a completely new communication architecture to create a “surround sound” of the party’s campaigns across multiple platforms. Delhi gets over 300 dengue cases in a week A.P. CRDA offers discount on residential, commercial plots to be auctioned on Oct. 13