A viral television news footage of a police officer stomping an anti-SilverLine (K-Rail) protester sparked a political firestorm in Kerala. The incident has given the Congress and the Bharatiya Janata Party (BJP) added impetus to assail the Pinarayi Vijayan government over the controversial semi-high-speed railway project, which the Opposition claimed faced a “groundswell of resistance”.

The government mistakenly believed it could bulldoze the project using strongarm tactics. Instead, the administration should address the public’s apprehensions about K-Rail. Union Minister of State for External Affairs and BJP leader V. Muraleedharan said the government had crossed a Rubicon. It had used the might of the State against citizens fighting for their land and home.

At Chala in Kannur, another anti-SilverLine hotspot, protestors scuffled with the police to prevent the laying of the markers.

Kerala Pradesh Congress Committee (KPCC) president K. Sudhakaran toured the locality, knocked on doors and spoke with residents fearful of getting displaced by K-Rail. The government had repeatedly claimed the markers were the precursor of a social impact study and not a bid to acquire the land for the railway line by ejecting residents.

However, the UDF has termed the administration’s insistence a tactic to pull the wool over the eyes of the public. The State police have ordered an internal inquiry into the incident. An official said the policeman involved in the incident had faced disciplinary action earlier. However, Leader of the Opposition V.D. Satheesan said a mere token departmental inquiry would not satisfy the public.

The government should prosecute the suspect officer and bring supervisors who ordered the belligerent action to book. Later, Mr. Satheesan visited Congress workers injured in the melee.

Communist Party of India (Marxist) Polit Bureau member A. Vijayaraghavan said the Congress and the BJP had aligned with Muslim fundamentalist outfits to whip up resentment against K-Rail out of political spite at the LDF government. The majority supported the scheme. 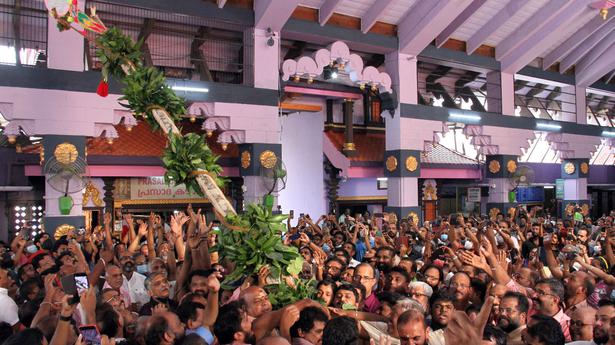 Thrissur Pooram festivities get off to a good start Emergency Operations Centre to be opened at Nilakkal