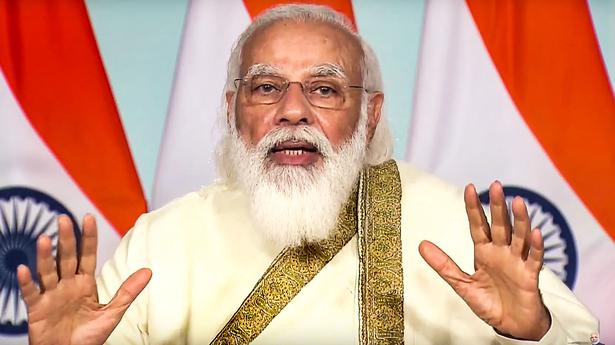 PM tweets minutes after Shehbaz’s swearing-in, but both sides stick to positions on terrorism, Kashmir

PM tweets minutes after Shehbaz’s swearing-in, but both sides stick to positions on terrorism, Kashmir

Prime Minister Narendra Modi wished Pakistan’s new PM Shehbaz Sharif on Monday, with a message of peace in a region “free of terror”. In a speech to the National Assembly a few hours earlier, Mr. Sharif had said that Pakistan desires good ties with India, which is “not possible without the resolution of the Kashmir dispute”.

The comments from both leaders, while different from the period of no bilateral engagement between Indian and Pakistani leaders during the last few years of ousted PM Imran Khan’s tenure, indicated that both sides will maintain their positions on terrorism and Jammu and Kashmir respectively.

“India desires peace and stability in a region free of terror, so that we can focus on our development challenges and ensure the well-being and prosperity of our people,” said Mr. Modi, expressing his congratulations to Mr. Sharif, in a tweet just minutes after Mr. Sharif was sworn in as Prime Minister in Islamabad.

Mr. Sharif was elected Prime Minister in the National Assembly on Monday, after days of uncertainty over the no-confidence motion against Mr. Khan, which was eventually resolved by the Supreme Court, who directed the vote be held on Saturday.

The Ministry of External Affairs had declined to comment on the “internal matters” of Pakistan, when asked about the turmoil in the neighbouring country. However on Monday, Mr. Modi discussed the situation in Pakistan and Sri Lanka during his virtual meeting with U.S. President Joseph Biden, officials said. Mr. Biden had not held any conversation with Mr. Khan after taking office in 2021, and the US President’s engagement with the new Sharif government will be watched closely as well.

In an hour-long speech after winning the vote, Mr. Sharif castigated Mr. Khan, accusing him of fostering a deterioration in Pakistan’s ties with several countries including China, Saudi Arabia and the US. He also criticised Mr. Khan for a failure to conduct any “serious diplomacy” after India’s decision to reorganise Jammu and Kashmir and amend Article 370.

“We want good ties, but there can be no peace without the resolution of Kashmir,” Mr Sharif said, adding that “neighbours are not a matter of choice”, calling it a “misfortune” that India-Pakistan don’t share good relations.

Mr. Sharif had accompanied his elder brother and three-time Pakistan PM Nawaz Sharif in December 2015, when Prime Minister Narendra Modi had made an unannounced visit to Lahore. Although ties between the two countries deteriorated shortly after, after the terror strike on Pathankot military base in January, Mr.Shehbaz Sharif was known for efforts to increase business and energy ties between the two countries. He was also believed to be privy to the backchannel dialogue held behind the scenes, with prominent businessmen as interlocutors , which eventually was taken over by NSA Ajit Doval and Pakistan’s military leadership.

In the weeks ahead, Delhi and Islamabad will be tracked for any outreach by either side, particularly on the economic front. India withdrew Pakistan’s MFN status, and Pakistan cancelled all trade ties with India in 2019, ending all economic engagement between them, except for pharmaceuticals over the past three years.

Ahead of arrival of Chinese vessel in Sri Lanka, Tamil Nadu to scale up security along the coast