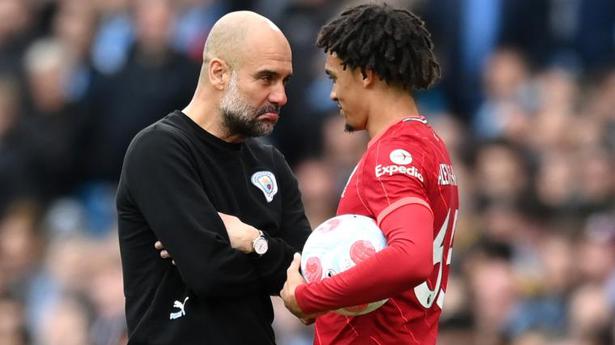 Man City’s Guardiola and Liverpool’s Klopp, who shared a warm hug at the final whistle, will pit their wits against each other again in next week’s FA Cup semi-final at Wembley.

Man City’s Guardiola and Liverpool’s Klopp, who shared a warm hug at the final whistle, will pit their wits against each other again in next week’s FA Cup semi-final at Wembley.

Manchester City and Liverpool played out a compelling 2-2 draw in their Premier League summit meeting on Sunday that leaves the title race too close to call.

Goals from Kevin De Bruyne and Gabriel Jesus either side of a Diogo Jota strike put leaders City 2-1 up at half-time but Sadio Mane levelled seconds after the restart to change the tone of the match.

Jurgen Klopp’s visitors, who had been on a 10-match winning run in the league, threatened to cut through again in the early minutes of the second half before City recovered their composure.

They had won all 22 games when scoring first before #MCILIVpic.twitter.com/6z9zc0MDnm

But neither side could find a winner, leaving Pep Guardiola’s defending champions just a point ahead of Liverpool with seven games to go.

Guardiola said his side had no margin for error in the run-in.

“Seven games left, we have to win all of them or it will be over,” he told Sky Sports. “We are going to play for that.”

He added: “We performed really well and I’m so incredibly proud of my team. But we knew before the game win, lose or draw it (title race) was not over. “

Klopp compared the contest in Manchester to a bout between two prize fighters.

“I think we can describe it as a boxing fight, both arms down for a second and you get a massive knock,” he said. “I liked a lot of things. I thought we were closer than ever.”

Billed as one of the biggest matches in Premier League history – between two of the finest sides, English football has seen – the contest at a crackling Etihad lived up to the hype.

After a cagey opening, the game burst into life.

Liverpool goalkeeper Alisson Becker raced off his line to deny Raheem Sterling, who was set up by Jesus as the home side attacked in earnest for the first time.

But the Brazil international was powerless to prevent De Bruyne’s wickedly deflected opening goal in the fifth minute after he was fed by a quick free-kick.

The Belgium midfielder skipped past Fabinho and fired in a shot that hit defender Joel Matip and went in off the far post.

A steward had to remove a blue flare from the pitch as home fans celebrated and the momentum was all with City, chasing a fourth league title in five years.

But their wild celebrations were cut short just eight minutes later when Jota scored his 15th Premier League goal of the season.

Andy Robertson crossed to the far post where fellow full-back Trent Alexander-Arnold cut the ball to the Portugal forward, who made no mistake.

Suddenly the Liverpool fans in one corner of the packed ground were in full voice.

Midway through the first half, City goalkeeper Ederson almost paid for an astonishing lapse in concentration, allowing a tame back pass to dribble within centimetres of crossing the line, with Jota sliding in.

City were shading possession and had the better of the openings but Liverpool posed a constant threat down the right through Alexander-Arnold and Mohamed Salah.

The home side was back in front less than 10 minutes before halftime when Joao Cancelo picked out the deep run of Jesus, who lifted the ball over Alisson from the edge of the six-yard box.

Liverpool were level again within seconds of the restart, before many fans had even re-taken their seats.

Salah picked out fellow forward Mane, who raced onto the ball through the middle and beat Ederson to celebrate his 30th birthday in style.

Guardiola’s men, who had the luxury of a 14-point lead over Liverpool in January, were rattled and Jota forced the City ‘keeper into action shortly afterwards.

The home side thought they had re-taken the lead in the 63rd minute but Sterling’s goal was ruled out for offside by VAR.

The two managers swapped attacking substitutions and it almost paid dividends for City when Riyad Mahrez had a glorious chance to win the match in the dying seconds but he lifted his shot over the bar.

Guardiola and Klopp, who shared a warm hug at the final whistle, will pit their wits against each other again in next week’s FA Cup semi-final at Wembley. 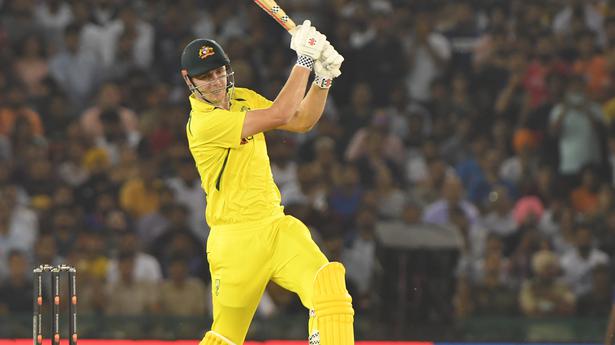 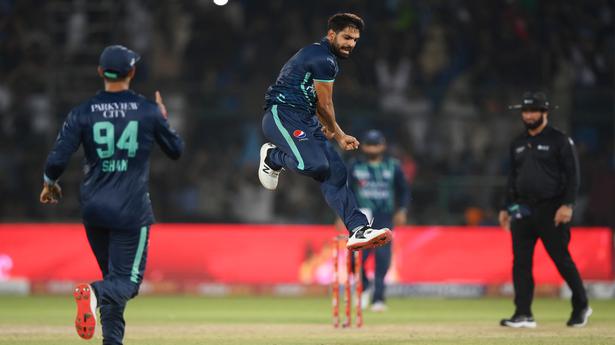