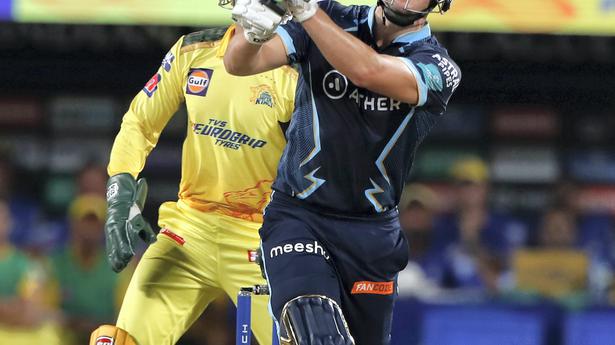 With 48 needed off three overs, the two swing the game Titans’ way; Ruturaj’s knock in vain for CSK

With 48 needed off three overs, the two swing the game Titans’ way; Ruturaj’s knock in vain for CSK

David Miller cemented Gujarat Titans’ position at the top of the table with a sensational unbeaten 94 (51b, 8×4, 6×6) as his side edged Chennai Super Kings by three wickets with a ball to spare and registered its fifth win of the season at the MCA Stadium here on Sunday.

Chasing a target of 170, the Titans were in big trouble at 16 for three in the fourth over with Maheesh Theekshana picking up two wickets. Opener Shubman Gill was snared by Mukesh Choudhary for a golden duck in the first over before Theekshana sent back Vijay Shankar (0) and Abhinav Manohar (12).

In walked Miller. For a large part of the chase, the South African left-hander single-handedly kept his side in the hunt. He hit boundaries with remarkable regularity before skipper Rashid Khan joined the party with a match-swinging 40 off 21 balls. The duo added 70 off 37 balls for the sixth wicket.

After being watchful for a few overs, Miller went after Moeen Ali, hitting a four and a six over long-on. He then turned his attention to Super Kings captain Ravindra Jadeja in the 12th over, slamming two sixes — one over long-on and the other over square-leg — before a four through covers brought up his 50.

Rashid, who was leading Titans in the absence of an injured Hardik Pandya (sidelined with a groin injury), held fort at the other end until the 18th over.

With 48 needed off the last three overs, Rashid waded into Chris Jordan, smashing the England seamer for three sixes and a four as the over cost 25 runs.

The Afghanistan all-rounder stayed low to get underneath the deliveries and used his supple wrists to whip them over mid-wicket and point with power and timing.

Despite some nervous moments, Miller knocked off 13 in the last over from Jordan as Titans scampered home with a ball to spare.

Earlier, Ruturaj Gaikwad finally found form in front of a boisterous home crowd — predominantly decked in CSK’s yellow — with a valuable 73 (48b, 5×4, 5×6) to help his side post 169 for five.

Electing to field, Titans’ lead pacer Mohammed Shami produced a brilliant three-over spell in the PowerPlay and had the CSK batters rooted to the crease.

After a sedate start, Ambati Rayudu (46), promoted to No. 4, and Ruturaj revived the defending champion’s innings with a 92-run stand for the third wicket off just 56 balls.

At the halfway stage, CSK was 66 for two, but in the four overs after that, both batters cut loose and added 58. However, Titans got back into the game, thanks to its pacers. Joseph conceded just 11 in his last two overs and also removed Rayudu. Jadeja’s unbeaten 22 off 12 balls with two sixes in the last over helped CSK to just about a par score which was not enough in the end.