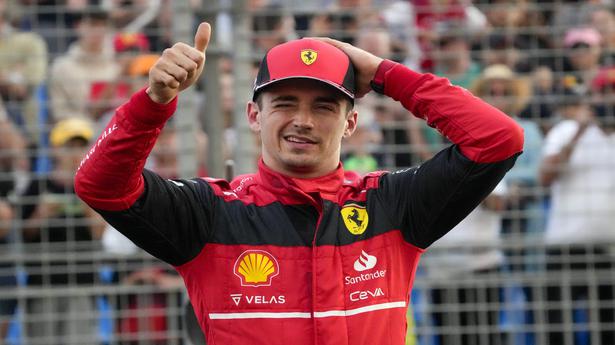 Ferrari driver Charles Leclerc claimed his second pole position of the year with a blistering final lap in qualifying for the Australian Grand Prix on Saturday.

Leclerc, who won the season-opening race in Bahrain in March, posted a time of 1 minute, 17.868 seconds to edge Red Bull driver and defending series champion Max Verstappen by .286 seconds.

Red Bull driver Sergio Perez qualified in third position, while Lando Norris will start from the second row in his McLaren after qualifying fourth.

Lewis Hamilton, who had claimed pole position in the six previous Grand Prix races held in Melbourne, finished .957 seconds behind Leclerc in fifth.

The brilliant drive from Leclerc gave Ferrari its first pole position in Melbourne since Kimi Raikkonen in 2007.

“It felt good. Even more, because it was a track I have always struggled at as a driver,” Leclerc said.

“In Q3, I managed to pull everything together. It feels great. Tomorrow we just need to do a good start and hopefully we can maintain pole position.”

Verstappen said he “didn’t really feel good in the car all weekend so far” and that it had been a “bit of a struggle . . . for me, this weekend has been all over the place. As a team, we want more.” In a major renovation to the Melbourne track, five corners were reprofiled at Albert Park and two were removed completely.

After two races, Leclerc leads the drivers’ championship with 45 points, followed by Sainz with 33 and Verstappen, who won in Saudi Arabia two weeks ago, with 25.

Felt like jumping on to a hill, says Sreeshankar