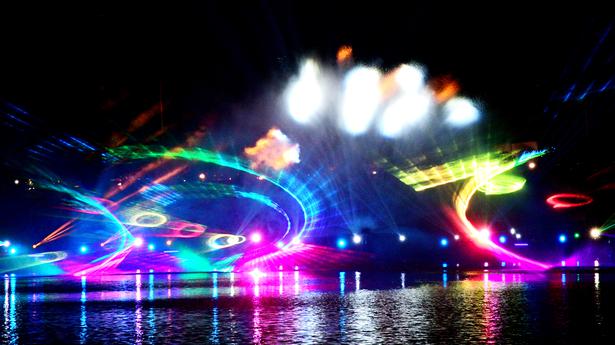 Beautiful entertainment unfolds with water, lights and videos at the iconic landmark of the city

Beautiful entertainment unfolds with water, lights and videos at the iconic landmark of the city

As a ray of colour lights up the night sky at Valankulam Lake, a video plays on the giant water screen that traces the rich heritage of Coimbatore. The event, Symphony by the Lake, a laser sound and light show on a water screen, a first for Coimbatore, is part of the ongoing Coimbatore Vizha celebrations.

At the show, water is pumped from the lake shaped like an arc, which is nearly 10 metres above the lake surface and 30 metres wide to project the multi-layered laser lights, rotating head beams, and LED lights, with music in the background. “A kaleidoscope of colours in different shapes and music comes together spectacularly for an entertaining evening,” says Ashwin Manohar from the vizha team. He is in-charge of the laser show.

Spirit of the city

Drawing inspiration from the light shows of Dubai, the team decided on something similar to offer a unique experience to the people. “We roped in a team from Delhi and Mumbai to ensure that the laser show comes out well. During the festivities, the whole city comes together and celebrates the spirit of the city. A common man cannot travel to Dubai or Singapore to see such a spectacle, so we bring it to them. The district administration has been of great support. The Collector and Corporation Commissioner have been tweeting about the show which has created a buzz.”

The 14th edition of Coimbatore Vizha, a festival for and by the people of Coimbatore, holds multiple events, for example art street or o viya santhai that showcases art and artists of the region, heritage walks, Paralympics and vintage and exotic car rallies to name a few. “Over 70 different organisations like the Rotary, Roundtable, schools, colleges, restaurants and the Young Indians of CII come together for the festival,” explains Ashwin.

The laser show starts off with a short animation video for children featuring cartoons followed by a seven-minute video titled Netru, Indru, Naalai on Coimbatore’s rich past and the way forward, and other popular songs like ‘Jai Ho’ and ‘Vande Matram’. The laser show also celebrates Coimbatore’s wetlands and lakes(fed by River Noyyal, the lifeline of Coimbatore) that draw a flamboyant variety of birds from across the globe. Says Ashwin,“It’s a city made by its people. That calls for a grand celebration.”

The show is free-to-view. Anyone can stop by at the lake and watch it. There will be six shows from 7pm to 10pm till April 17. 30 years of India-ASEAN ties celebrated through an art camp in Udaipur. Meet the artists Indian designers team up with artisans to create edgy décor