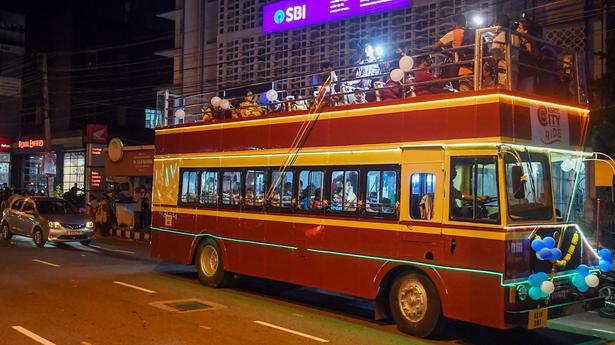 Speaking after flagging off the new KSRTC city ride bus for tourists visiting the capital here on Monday, Mr Riyaz said the project, which started in Thiruvananthapuram, was expected to be expanded to other cities in a phased manner in the future.

The ‘Foodie Wheels’ started in Vaikom and ‘double decker city ride bus’ in Thiruvananthapuram—a project where the tourists can see and enjoy different parts of the city of Thiruvananthapuram—were projects worth emulating for the rest of the State, said the Minister. Presiding over the function, Transport Minister Antony Raju said that the city ride project was an idea conceived by the Tourism Minister.

The children and staff of the State Child Welfare Committee made the first trip with the Ministers. The night service will be held at Padmanabhaswamy Temple, Secretariat, Legislative Assembly, Museum, Kanakakunnu Palace, Vellayambalam, Kovalam, and Lulu Mall routes. Booking and other details are availble at 9447479789 (Mobile & WhatsApp) and 8129562972 (Social Media Cell WhatsApp).