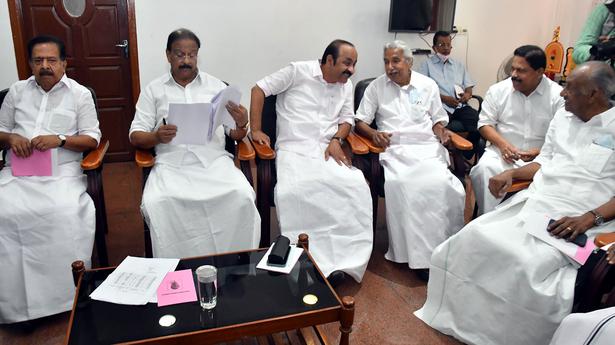 By some accounts, the meeting of the Political Affairs Committee (PAC) of the Kerala Pradesh Congress Committee (KPCC) at the Indira Bhavan here on Monday was a stern-faced affair.

Several PAC members, who met behind closed doors, are rumoured to have argued against smoothing over Congress leader P. J. Kurien’s article “criticising” the party’s national leadership. They reportedly felt a swift and firm reprimand for disciplinary issues was in order. If not, the KPCC leadership arguably risked looking like it had lost control of the party’s whip.

Referring every disciplinary matter to the All India Congress Committee (AICC) could appear as if the high command was forcing decisions on the State-unit on provincial issues.

The Communist Party of India (Marxist) [CPI(M)] had of late engineered several defections from the Congress by targetting “some disgruntled and few over-the-hill” leaders.

An insider claimed that the “desertions” had a low impact on the KPCC’s organisational resilience. Its membership drive had gathered momentum. At least 13 lakh had already applied for membership online. The K-Rail agitation had animated party cadres.

He asserted that KPCC and Congress Legislative Party (CLP) party leaderships had responded in real-time to social issues, including the agrarian distress in Kuttanad.

Nevertheless, the CPI (M) had arguably gained some propaganda advantage by spotlighting the defections to portray the KPCC as a sinking ship. Hence, some leaders in the PAC reportedly felt that pre-emptive disciplinary action was the best recourse when desertions were the flavour of the season.

The KPCC had already recommended disciplinary action against Congress leader K. V. Thomas for “cosying up” the CPI(M) by attending a seminar at its recently concluded party congress in Kannur.

Some political theatre heralded the PAC meeting. Mr. Kurien skipped the meeting by citing family reason. His decision to dodge the meeting was followed by Mr. Thomas’ complaint that the KPCC had not invited him. He also demanded disciplinary action against Congress workers who buried him in the effigy at Kumbalangi in Kochi.

A Congressperson said the KPCC seemed increasingly focused on preventing the Thrikkakkara Assembly seat left vacant by late P. C. Thomas from sliding away from the UDF.