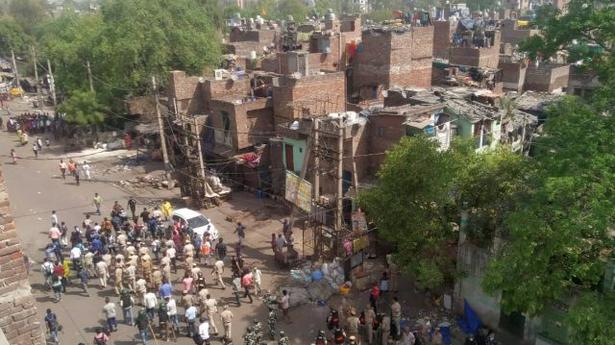 Heavy police and paramilitary forces were deployed in violence-hit Jahangirpuri during Wednesday’s anti-encroachment drive in the area, even as the local Mayor called it a “routine exercise”.

The drive was undertaken a day after Delhi BJP chief Adesh Gupta wrote to the party-ruled North Delhi Municipal Corporation (NDMC) to identify illegal constructions of “rioters” in Jahangirpuri and demolish them using bulldozers.

Meanwhile, the Supreme Court, in the forenoon, ordered the stopping of the demolition drive by authorities in the area of Delhi and agreed to hear a petition challenging the action of the civic bodies allegedly aimed against the accused of the communal offences.

As the demolition drive continued even after its order, the apex court directed the court’s Secretary-General to convey about the order to the NDMC Mayor and the Delhi Police Commissioner immediately to stop demolition drive.

The area had witnessed violent clashes, including pelting of stones, arson and firing, between two communities during a Hanuman Jayanti procession on Saturday. Eight police personnel and a local resident had sustained injuries.

Senior advocate Dushyant Dave makes a second urgent mentioning before the CJI that despite the SC ordering the encroachment drive to stop, it is still continuing.

“Despite the world knowing the court’s order… Despite knowing you have intervened, they are continuing saying we have not received the order… This sends a terribly wrong message”, Mr. Dave told the CJI.

The Court then orders Secretary General, Supreme Court, and Judicial Registrar to immediately communicate to the Mayor, Delhi Police Commissioner, NDMC and NDMC Commissioner that it has ordered status quo in the Jahangirpuri demolition drive

The eviction drive continues despite the apex court order, “Since the court order is et to be received, the anti-encroachment drive is continuinng”, says a North DMC official.

Following an urgent plea by senior advocate Dushyant Dave, the Supreme Court on April 20, 2022 orders status quo in the eviction drive being carried out by the North Delhi Municipal Corporation in the riot-hit Jahangirpuri today.

Bulldozers have reached Jahangirpuri to carry out a proposed “encroachment removal action programme” by the North Delhi Municipal Corporation.

The Delhi Police said that they will provide adequate protection to the agency to carry out the drive.

Officials said security forces were carrying out a flag march in the area and they took stock of the situation before the drive was launched. A drone had also been deployed to monitor the situation.

Ahead of the drive, people in Jahangirpuri C Block voluntarily removed their belongings from roadsides, they said.

(With inputs from Agencies) Fadnavis should explain why Savarkar was getting pension from the British: Maharashtra Congress chief Patole