“Do you need bulldozers to clear stalls, chairs, tables and boxes,” the Supreme Court asked the New Delhi Municipal Council (NDMC) on Thursday.

A Bench of Justices L. Nageswara Rao and B.R. Gavai extended the status quo order on the “anti-encroachment” drive in Jahangirpuri until further orders.

The question from the court came after Solicitor General Tushar Mehta, for the NDMC, explained that the law permitted the removal of “stalls, benches, boxes, ladders”, etc, occupying public streets and footpaths without permission.

“So, the demolition carried out yesterday [in Jahangirpuri] was restricted to benches, boxes and chairs,” Justice Rao asked the Solicitor General.

“Whatever was on public street, on footpath… That is my instruction,” Mr. Mehta said.

“For stalls, benches, boxes, ladders and chairs, do you need a bulldozer,” Justice Gavai asked.

The Solicitor General conceded that “when you need bulldozers, you need it for buildings”.

The court allowed people affected by the demolition on Wednesday to file affidavits, especially on the point whether their possessions were destroyed without prior notice. The NDMC would file its reply. The court said it would list the case after two weeks.

When Mr. Mehta raised a mild objection about continuing with the stay, Justice Rao shot back, “do you want the structures to be demolished? And thereafter what will be left?”

The court made it clear that it had no intention to turn a blind eye to demolitions that continued after the status quo order.

“Mr. Solicitor, we take a serious view of the demolitions that took place after… after information [about status quo order] was given to the Mayor… We will deal with it later,” Justice Rao told Mr. Mehta.

“She witnessed the razing of six or seven buildings… She had to physically resist… Then only they stopped. If she had not been there, they would have completed the demolition of the entire Block C, My Lords… I am not bringing in politics. This is a fact,” Mr. Surendranath submitted.

“The status quo order was passed at 10.45 a.m. What time was it communicated,” Justice Rao asked.

“The Mayor himself had gone on media at 11 a.m. to say that Supreme Court order would be complied with… But then he complied with it at 12.45 p.m.,” senior advocate Dushyant Dave submitted.

Senior advocate Sanjay Hegde, for Ganesh Gupta whose juice shop in Jahangirpuri was allegedly destroyed without prior notice, sought compensation.

“It is inconceivable that property is demolished without prior notice… Right to life also includes right to livelihood and shelter. These are poor people… If you are worried about encroachments in Delhi, then come to Sainik Farms and Golf Links… come to South Delhi where every second building is unauthorised… Come and demolish them. There are 731 unauthorised colonies in Delhi, why is only this particular area being targeted… Has bulldozer become an instrument of State policy,” Mr. Dave challenged.

“Is bulldozer meant to instill fear or is it a way of sidelining the rule of law? Muslim properties are being associated with demolitions… Somebody is accused of an offence, his home is demolished… Is this like an extra legal punitive measure,” Mr. Sibal asked.

During the hearing, Mr. Mehta countered that prior notice about the anti-encroachment drive to clear public roads was indeed issued. In fact, this was the fifth day of a drive which began in January. The High Court had ordered demolition.

He said allegations that a particular community was being targeted were factually incorrect. Mr. Mehta said 88 of the persons affected by the recent Khargone demolition drive in Madhya Pradesh were Hindus and 26 were Muslims.

The Solicitor General questioned why organisations such as the Jamiat Ulama-I-Hind were moving the Supreme Court instead of individuals affected by the demolition.

“Whenever an issue arises, instead of individuals, a particular section involves an organisation, and thereafter, the entire political spectrum also jumps in,” Mr. Mehta submitted.

He said that if affected individuals came to court with specific grievances, the authorities could check whether prior notice was issued to them or not.

“That is why organisations come and not individuals… Individuals would have to show proof and it would be clear whether notice was issued to them or not,” Mr. Mehta submitted.

Mr. Mehta said the court should be careful while entertaining petitions which may become “a precursor to every spectrum jumping onto the bandwagon”.

“Rest assured, Solicitor, we know where to put a stop,” Justice Rao responded.

“If we learn that these petitions are frivolous, are we not entitled to bring any action against them,” Justice Gavai asked the Solicitor General Four arrested on charge of stealing cows near Mangaluru 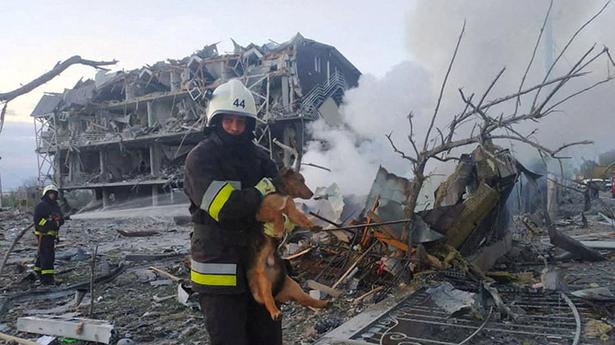