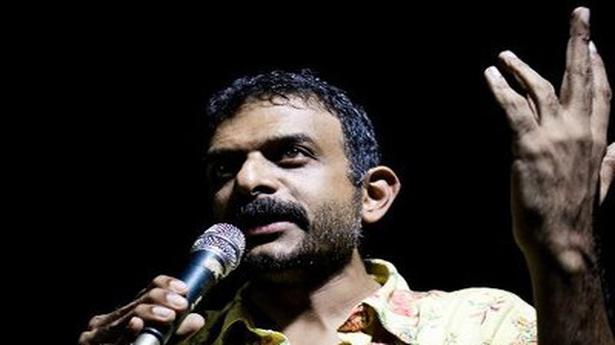 Cultural conversations and conversations on various faiths have to be nurtured, says the Carnatic vocalist who rendered select verses of Sree Narayana Guru at Hosanna Mount, Pala

Cultural conversations and conversations on various faiths have to be nurtured, says the Carnatic vocalist who rendered select verses of Sree Narayana Guru at Hosanna Mount, Pala

Carnatic vocalist, composer and author TM Krishna will be rendering select verses of Sree Narayana Guru at Hosanna Mount, Pala, on April 9. Hosanna Mount is dedicated to the memory of Joseph Pulikkunnel, writer and social reformer.

The concert is being organised by Backwaters Collective, Nool Archives, Hosanna Mount and Uru Art Harbour and supported by DC Books.

Mr. Krishna talks to The Hindu about the significance of the concert, and why it is especially important to sing the Guru’s verses in the backdrop of a sudden surge of caste- and religious-based discrimination against artistes in certain temples in Kerala.

Edited excerpts from the interview:

What are your thoughts on artistes belonging to different faiths not being allowed to perform in some temples in Kerala?

It is atrocious that an artiste is not allowed to perform in a temple based on religious belief or non-belief. A temple has always been considered as a place where, as far as culture and music are concerned, people of various faiths or no belief at all could participate in the arts and culture. The beauty of any kind of non-exclusive space is that anybody can participate in the celebrations.

What about the great Nagaswaram artistes? There are Muslims. The greatest was (Sheik) Chinna Moulana. Are we going to say he couldn’t play at a temple? It is shocking that this is happening in Kerala. I am deeply worried that religious institutions are taking such steps. Recently, we read about the hijab row in Karnataka, then there is this rule that non-Hindus can’t have shops around temples… I don’t know what we are doing to ourselves. It is tragic.

In that context, your concert at the Hosanna Mount in Pala has an important symbolism…

It becomes even more significant that we have these places where cultural conversations; conversations on various faiths have to be nurtured. No religion is an independent one. Religions have always spoken to each other, have always shared and there may have been disagreements, but there has been that coming together in commonality. After all, every belief is about finding goodness in yourself. Whether you call out to any god’s name, finally you are seeking to be a good person. And that means there has to be an interplay of various faiths. I think this concert is significant, and the voice of Guru becomes very significant in that context.

I have already rendered verses where he is talking about who is god? Is it Allah, Jesus, Buddha, Krishna? So, when he says who it is, He is saying it is all and it is none. It is even more significant that we are having this concert where faiths are going to intermingle.

Will you be singing only the Guru’s verses?

It is three-four years now since we started the ‘Guru project’. The idea was to bring the Guru’s compositions and poetry into the Carnatic music concert platforms. It started with the first concert in Bombay (Mumbai). Then I performed at various locations. My concert in Pala will predominantly be on the Guru’s compositions on various subjects. Also, in his compositions, you can see so many things. You can see utter faith in a deity or a goddess, at the same time he is philosophical. You can see the subversion of mainstream hegemonic systems. Guru is a spectrum of possibilities, someone who got together the social conversation and the spiritual conversation and did not run away from either.

Recently, in an interview, you remarked that the liberals have failed the country. Would you explain why you felt that?

One part of life is faith. Whether I or you believe, the fact is that faith is important for hope. Faith is what gives you the strength to wake up the next morning, especially, if you are a person who feels down or is on the margins.

The other thing is to think that a religious person is a socially insensible person, not modern enough. These are ridiculous condescending ideas we have developed in the liberal world. We almost look down upon a person with religious faith. That is entirely wrong. Ugly human beings exist everywhere. There are ugly liberals as much as there are ugly religious people. So there is a certain ‘othering’ that the liberal world has consistently done. That is one reason why we are seeing what we are seeing in this country. I want to take responsibility for this.

In my opinion, let’s forget the extreme people because it is very hard to have a conversation with them. But what about the range of people in between? What is the modern liberal conversation with that range (of people)? In that range, some people want to hold on to the temple, prayers and rituals. What is my dialogue with them? I think we have failed. I think it is important there is a self-reflection from those on the left on centre and the liberals about the issue. We don’t even have a language for it.

If you want people, of any kind of hue and colour to engage, in what I would call, a very necessary social conversation about identity, location, power dynamics, privilege etc, you also need to say how their faith can be part of the conversation, not say faith is a hindrance to this conversation. This needs to be part of our conversation. It is not easy. I concede that. I know it is messy but if you are not willing to do this, our country will go further down. That’s what I feel.

You are a person of privilege, practising a privileged art? So where does that place you? It is a problematic space to occupy. But, at the same time, it is important to engage in conversation with the privileged. The privileged have to change. They have to be pushed and asked uncomfortable questions. I am only speaking the truth with my audience. I want their experience of Carnatic music and culture to be more complicated and complex. My space is pushing you into conversations in these areas, whether it be with socially privileged, culturally privileged or socio-economically privileged people. Those are the areas I want a conversation and I have my conversations.

Many compositions in Carnatic music are devotional, dedicated to gods and goddesses of the Hindu Pantheon. Do you think we need to widen the repertoire of Carnatic music by bringing in new themes?

Over the last three years, along with Perumal Murugan Saraswathy Nagarajan, we have brought in a lot of Tamil compositions, which are on nature, social themes, such as discrimination, manual scavenging etc on the Carnatic music platform. Then there are compositions written by Islamic Sufi saints, we have brought in Christian compositions on Jesus, in Tamil and Malayalam. So, yes, I think it is important to enlarge the spectrum of content in Carnatic music. There are no two ways about it. It is not just content. It is also about dialect.

I always think how even when we are talking about god, the dialects are different. The dialect used in Carnatic music is also a privileged dialect. Whether it is Tamil, Malayalam, Kannada or Telugu, the dialect is of the privileged. I think even the dialect needs to be challenged. In fact, with Perumal Murugan, we try and do that. He uses the dialect of the ?? in his area, which is not generally used in Carnatic music. We need content, dialect, multi-religiosity and contemporariness in Carnatic music. We live today. So let’s talk about today. If people feel profound divinity from these varied themes, then something interesting is happening there. Not only do Rama and Krishna evoke the divine feeling but other themes also evoke that. We create a conversation. Even disturbing themes in the content may evoke a very deep experience. Then, I think, the rigidity of the compartments will disappear. And the fluidity of mind and heart will take place, at least a possibility of it exists. I can work. But everybody needs to work in their own sphere to bring in this plurality in what we sing, what we think, what we dance, what we write.

Places of worship shouldn’t use children to spread hatred: panel