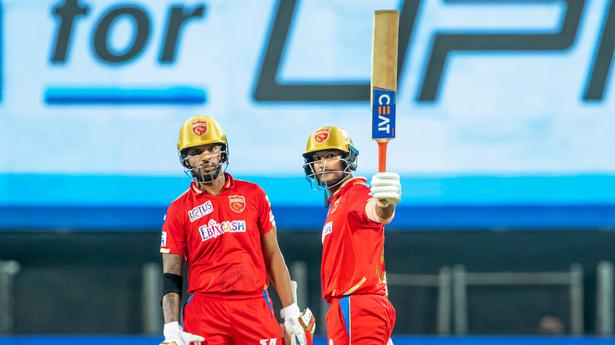 Skipper Mayank Agarwal and veteran Shikhar Dhawan struck their first half-centuries of the season as Punjab Kings rode on a fine start from the openers to post a challenging 198 for five against Mumbai Indians in an IPL match here on Wednesday.

Punjab Kings have deployed “attack is the best form of defence” philosophy during this edition of the league and there was no shift in policy as they added 97 in less than 10 overs to provide a perfect launchpad but Jasprit Bumrah’s (1/28 in 4 overs) brilliance kept the score below 200.

Bumrah’s toe-crusher which yorked the dangerous Liam Livingstone helped MI to keep things under check with 99 runs coming of the last 10 overs.

Agarwal, who wasn’t having a great run before this game, brought his customary square off the wicket shots on the off-side and straight lofts of spinners to score 52 off 32 balls.

Dhawan took his own time while playing the second fiddle but still kept up the tempo letting Agarwal go for the whole hog during their stand. But he did accelerate after that before getting out for 70 off 50 balls.

It was Mumbai’s domestic bowlers like Basil Thampi (2/47 in 4 overs) and Murugan Ashwin (1/34 in 4 overs), who aren’t measuring up match after match but skipper Rohit Sharma is helpless due the lack options.

Despite knowing Agarwal’s propensity to make room and smash through off-side, he was fed with length balls outside the off-stump by Thampi and Tymal Mills. When they bowled short, the pace was used to good effect.

In case of Ashwin, the PBKS skipper would come down the track to loft him straight but he did get his man when Agarwal went for one shot too many.

Dhawan went onto his 45th IPL half-ton but the shot that showed his authority was a disdainful slog sweep off a 137 click delivery from Thampi.

Thampi did get his revenge by getting Dhawan caught in the deep before rookie Jitesh Sharma (30 no off 15 balls) smashed 23 off Jaydev Unadkat (1/44 in 4 overs) in the 18th over to get the momentum back which had slipped after a few dismissals. Morning Digest | Salman Rushdie stabbed on stage in New York; India tells China to not alter the status quo around Taiwan, and more