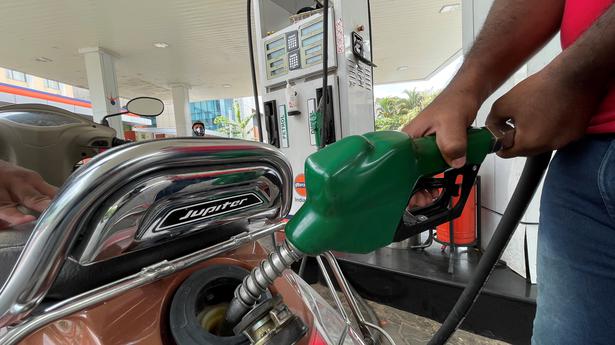 The rise in fuel prices, soon after Assembly polls concluded in five key States and made worse by Russia’s invasion of Ukraine, has had a domino effect on essential commodities, especially food products. Though households have reduced their monthly expenditure, there are fears that prices will continue to rise over the next two months.

In fact, people have been struggling with rising costs even before the war. When fuel rates reached unprecedented levels in 2021, both the State and Union Governments had reduced taxes in November. However, the outlook is bleak this year too, with crude oil prices also seeing a rally due to the Russia-Ukraine war. As on Friday, petrol was ₹111.09 per litre and diesel ₹94.79, almost back to November 2021 levels.

India’s retail inflation has shot up to 6.95% for March 2022, the highest in nearly a year and a half. This is the third consecutive month when inflation is above the 6% threshold prescribed by the Reserve Bank of India. Power and transport sectors have also hiked their service costs in the State. There have been proposals to hike water and bus ticket tariffs in Karnataka, but they are yet to be approved by the State Government.

The food sector is one of the worst affected. “The rally in fuel prices has an immediate direct impact on prices of all items, especially food products due to increasing costs of transport and logistics. It has clearly added at least ₹1 – ₹1.5 to every kilo of any food product by the time it reaches the consumer,” said Ramesh Chandra Lahoti, chairman, APMC Committee, Federation of Karnataka Chambers of Commerce and Industry (FKCCI). This is evident in how retail food inflation hit 7.68% for March from 5.85% for February. It is only expected to rise further in April and May.

The Russia-Ukraine war has disrupted the market in wheat and edible oils, which in turn has affected related products. “We used to import most of our sunflower oil from Ukraine but that has completely stopped now. As supply of sunflower oil has dried up, people have shifted to groundnut and palm oils, pushing up prices,” said Shailesh Ladhad, a senior oil merchant in the city. Prices of edible oils have seen an unprecedented rally in the range of 30% to 60%.

Ukraine and Russia had been key suppliers of wheat and wheat related products to Europe and the entire supply chain has been disrupted, prompting exports from India. This has affected demand and prices in local markets as well. While wheat has seen a rally of over 25%, other products such as atta and various kinds of ravas have also been affected. “The prices of edible oils, wheat and related products are expected to be on the higher side for the next few months,” said Mr. Lahoti. Food inflation and rise in fuel and LPG gas prices has only prompted hotels in Bengaluru to hike prices of all items on the menu by around 10%.

Despite the food inflation, farmers are not happy either as they are not benefiting from it. “Most of the crops in the State are being sold at lower than Minimum Support Price (MSP) levels, which by themselves are mostly lower than costs incurred by the farmers. It is the traders who are making big bucks hiking prices, not the farmers. In the last six months, no crop has provided a good price for farmers in the state,” said farmer leader G.C. Bayyareddy.

Input costs for farmers have increased sharply as chemical fertilisers and diesel have become more expensive. For instance, a quintal of DAP price has shot up by nearly 60%. “How can the farmers make ends meet with over ₹700 hike in fertiliser? Diesel prices have also gone up. The recent subsidy scheme announced by the State Government – ₹250/acre towards diesel costs – is too little,” said another farmer leader Kodihalli Chandrasherkhar.

Conference of interventional cardiologists in Kozhikode from Saturday