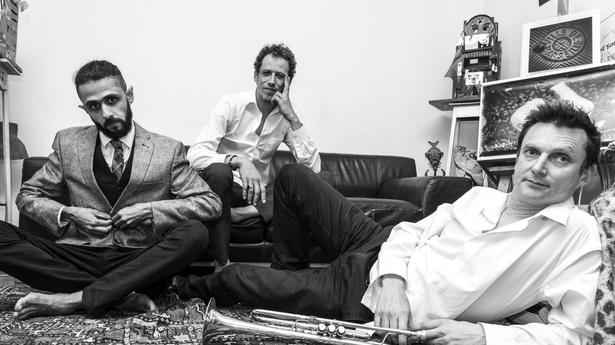 In between live performances in India and multiple flights, musicians Arfaaz Kagalwala, Florent Silve and Martin Saccardy are busy sampling butter chicken and biryaniIndo-French band Electrik Po is set to perform in Hyderabad, Chennai and Puducherry as part of Bonjour India 2022

Indo-French band Electrik Po is set to perform in Hyderabad, Chennai and Puducherry as part of Bonjour India 2022

Electrik Po’s music is a melange of different influences. Now, audiences in India can get a taste of its music as the Indo-French band tours the country for the first time as part of Bonjour India 2022, an Indo-French artistic, cultural, educational and social initiative that celebrates cultural, literary and scientific partnerships between France and India. Bonjour India is organised by the French cooperation network in India comprising the Embassy of France and its cultural service, Institut Français en Inde, the Alliance Française network and the Consulates of France.

Founded by Arfaaz Kagalwala, Florent Silve and Martin Saccardy, the band after performing in Gurgaon, Delhi, Lucknow and Chandigarh, will play in Hyderabad (April 21), followed by Chennai (April 22) and Puducherry (April 24).

Drummer, singer and producer of electronic music Arfaaz Kagalwala aka Fuzzy Logic describes the music as a fusion of many styles with some Indian and Balkan flavours. “It is festive and can make you dance but can also be relaxing and let you chill; it has cinematic sort of soundscapes as well,” he elaborates. The trio did not know what to expect since this is the first time they have taken their music outside France but were pleasantly surprised to see the audience dancing and having a great time.

This is Florent (bass and keyboard player) and Martin’s (vocalist and trumpet player) first visit to India. Florent, a jazz musician at heart, is a multi-instrumentalist and likes Indian music too. “I play the tabla as a hobby,” he says. As the founder and president of Free Monkey Record label, he is also an arranger, director, producer and editor assisting artistes in their projects.

Studying at the Classical Music Conservatory in Brittany, and then in Paris, Martin discovered Balkan music thanks to the ‘ Les Pires’ group with whom he was associated for over 25 years. He has worked with world music artists such asIbrahim Maalouf, Haidouti Orkestar, Calypso Rose, L’attirail and Jahida Wehbe. Currently, he is a musician on ‘Le Bourgeois Gentilhomme’ , a 400-year-old satirical drama written by Molière with musical and dance interludes Also, the music that Electrik Po plays is the original one revisited Balkan style) at France’s state theatre The Comédie Française directed by Christian Hecq and Valerie Lesort.

Why is the band called Electrik Po? “It is a story of serendipity,” quips Arfaaz, who has composed for films like Suleimani Keeda, Charlie Ke Chakkar Mein and Rise of The Zombies. “Po, the panda in the movie Kung Fu Panda becomes a kung fu master without planning to become one. We too formed the band without any plan,” he adds. Arfaaz met Florent in Marseille, France in 2016. Having played together for 20 years with the well-known French pop artiste Benabar (Bruno Nicolini), Florent and Martin decided to play together in 2019 but could not perform due to the COVID-19 lockdown.

The group, however, got a residency programme by l’AMI, an association in Marseille that supports experimental music. The first three songs that they wrote and composed during that time have now been released in an EP recently.

With the reopening of the live events industry, Arfaaz believes there is a renewed vigour among musicians. “The pandemic halt for two and half years was like taking away a bottle from a baby. We were active creatively but not having an opportunity to play did affect us,” he recalls adding a bit of optimism, and the will to create in any circumstance helped them to tide over it. “The phase also showed that the creative spirit cannot be locked down. .”

The India tour naturally lifted their spirits and with Arfaaz’s brief description of Indian food and culture, Florent and Martin were excited to have a gastronomic tour. Yet so far, due to a hectic schedule, they have discovered only biryani, butter chicken and parathas amid flights and sound checks. “I also taught them how to eat with their hands and now they’ve become pros! We are lucky that our tour manager (Tanish Thakker) is a foodie and always finds a way to get some good food in between all the running around.Now we are excited to explore some South Indian cuisine, especially Andhra dishes, idlis, dosas and rasam.” Costumer from Kozhikode had her dream come true with Mani Ratnam’s Ponniyin Selvan: 1