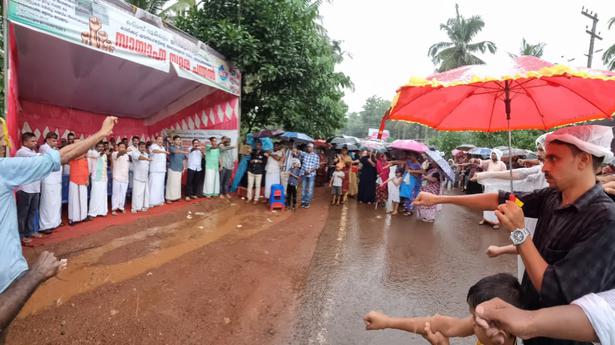 They have surrendered land several times, and any further acquisition will render them homeless, the people say

They have surrendered land several times, and any further acquisition will render them homeless, the people say

The people of Palakkaparambu in ward 30 of Kondotty Municipality are up in arms against the Airport Authority of India’s (AAI) move to expand the Calicut airport runway further. They say they have surrendered their land for the airport and its expansion several times, and any further acquisition of land will render them homeless.

“We have surrendered our land 11 times for the airport and its multi-phased expansion. As many as 30 hillocks in the area were levelled for this tabletop airport. We sacrificed our land and many facilities that we had for the airport, which we considered as ours. Now we are being pushed against the wall in the name of further expansion, and there is no way that we will surrender our last piece of land,” said K.P. Firos, Municipal Councillor from Palakkaparambu.

He said the airport, in which the people used to take pride, had become an irritant for the people who surrendered land for it. “We need the permission of the AAI for any construction now,” said Mr. Firos.

He said that the Calicut airport, with the existing runway and facilities, had operated about 130 flights a day during the floods in the State in 2018. “We have adequate facilities and runway length. We suspect the involvement of some black hands with the intention of helping the private players behind the move in downgrading this airport,” he added.

Daring the rains, dozens of women and children joined the human chain held as part of the protest. They took a pledge not to give any more land for the airport.

Small-scale coir units on the warpath