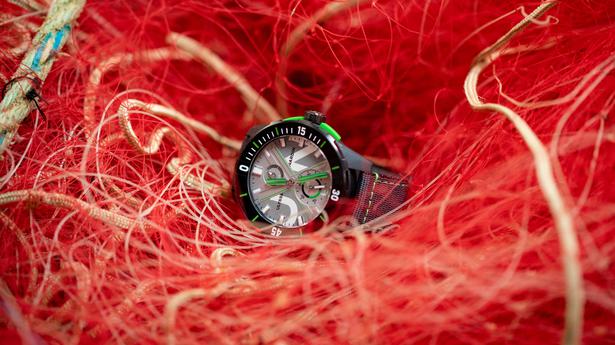 At the recently concluded Watches and Wonders in Geneva, many top-end watchmaking brands showcased how they are embracing the idea of sustainability, using recycled materials for straps and other parts, and considering more eco-friendly alternatives

At the recently concluded Watches and Wonders in Geneva, many top-end watchmaking brands showcased how they are embracing the idea of sustainability, using recycled materials for straps and other parts, and considering more eco-friendly alternatives

The word ‘sustainability’ is a strong term today, separating the jaded lot from the ‘woke’ and holds all the potential to get even the biggest and most established of corporate entities ‘cancelled’. In the realm of watchmaking, a world as old as, well, time measurement if not time itself, these words are relatively new. And they make for a paradox of diabolical proportions.

Well, for starters, the idea of owning an expensive timepiece is a sustainable one; nobody buys and discards such watches. Even if they get resold, they can remain in circulation for decades. In fact, they are often so well preserved that a vintage watch can get elevated to a whole new price strata over time. So even if the parts used in such watches aren’t entirely biodegradable, the long-term usage in this case probably outlasts most other products in other sectors, including luxury products like small leather goods and designer wear.

At the recently concluded Watches and Wonders in Geneva, many top-end watchmaking brands showcased how they are embracing the idea of sustainability. From using recycled materials for straps and other parts and considering more eco-friendly alternatives (from production to packaging) to up-cycling parts from previous models, there is a growing consciousness among the houses to be accountable and responsible.

Sure, it means a higher cost. But in a world where a hand-crafted timepiece can cost an easy $100,000, the added cost of being seen as sustainable (and/or ethical) is less than negligible while endowing the brand (and wearer) with a certain feel-goodness. It is also a big way to show just how forward-thinking an industry can be while remaining rooted in history. Holy Zeus, the ad campaigns are almost writing themselves at this point.

But here’s where things get somewhat ironic, especially when seen from the consumers’ POV: it seems serious collectors don’t really care for just how eco-friendly their single axis tourbillon can be. As long as it is a certified chronometer, does one really care if the strap was made in collaboration with Parley and uses a significant percentage of recycled ocean plastic waste? If one can assuredly get their hands on the next Daytona edition, will they flinch if it was to be found that Rolesor isn’t as eco-friendly as it was originally deemed to be? Demand so outstrips supply that even if these Grandes Complications timepieces were to switch entirely to making them out of recycled or sustainably-procured materials, the total impact would be less than me skipping steak every weekend for an entire year. And that’s not even accounting for the plastic bottles of barbecue sauce which will get spared in the process!

Also, when one is considering buying a watch, which can measure astronomic complexities, the USP of sustainability doesn’t really build itself well into the talking points, just like the person who outbid everyone at a heated auction to acquire a Picasso original from his Blue period doesn’t care about how toxic the paints on that canvas were. In other words, flaunt and covet value trumps all else.

By contrast, a modern watch may claim to use recyclable materials but has a life of no more than a few years. Smartwatches, which far outsell traditional timepieces in numbers, in less than five years will be entirely obsolete and useless when the sensors are outdated, the software updates cease, and the battery is a weakened version of its original self. The amount of waste this one watch will generate, extrapolated to the total number of such tawdry smart-wear devices which get written off every few months, all to satiate this craze to receive notifications, track steps or measure resting heart rate is the real environmental hazard! There’s your straw, man. If anything, go after them.

Magandeep Singh is an unapologetic bon-vivant and a curator of refinement. And this column is for anyone who gives an existential toss. Artisanal craft chocolates made in Rajahmundry