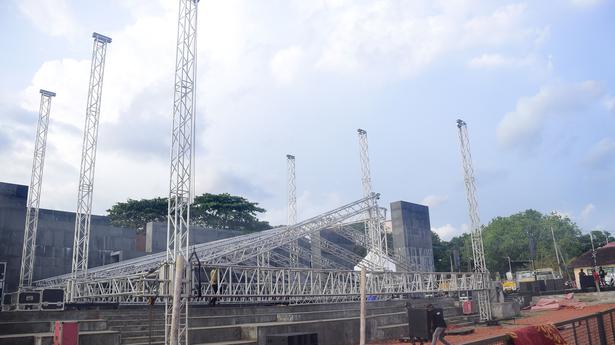 The first anniversary celebrations of the second LDF government led by Pinarayi Vijayan will begin at the Kozhikode beach on Tuesday. The festivities will be inaugurated by P.A.Mohamed Riyas, Minister for Tourism and Public Works, while Ahamed Devarkovil, Minister for Ports and Archives, will be the guest of honour. A.K.Saseendran, Minister for Forests, will preside over the event which will be attended by all MPs and MLAs of the district besides Kozhikode Mayor Beena Philip and District Collector N.Tej Lohit Reddy.

The exhibition being organised as part of the celebrations will have 218 stalls by various government departments and organisations, including sales counters and 50 theme stalls to create awareness on the government projects.

The programmes are being held from April 19 to 26. A proclamation rally from Muthalakkulam to the beach at 4 p.m. on Tuesday will mark the beginning of the celebrations.

There are also a series of seminars over the week. Seminars on “Values of the Constitution that need to be protected”, “Through renaissance to the new Kerala”, “Six years of Navakerala Mission”, “Kerala models of survival”, “Kozhikode of tomorrow”, “Gender status and social justice” and “Infrastructure development and tourism possibilities” are the seminars being held everyday from April 20 at 4.30 p.m. at the Freedom Square.

There are also departmental seminars everyday at 3 p.m.

Service and sales stalls by various departments will be set up at the pavilion on the beach.

The concluding ceremony of the event will be held on April 26 at 7 p.m.

2 held for vandalising auto in Parassala