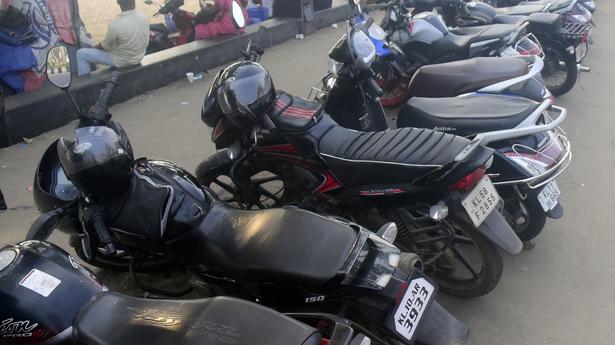 Unguarded parking slots in different nooks and corners of the city are emerging as safe destinations for robbers specialised in fuel theft. Some of the latest incidents reported from Kozhikode beach and railway station premises reveal that the robbers are largely focusing on emptying the fuel tanks of motorbikes in the wake of the hiked prices of petrol.

As the police investigation is yet to expose any such suspected gangs, there is no clue yet whether they use it for resale or for personal purpose. Heavy vehicles parked in isolated locations have also fallen as soft targets of the gangs in the city limits.

Taxi drivers in the city say the isolated incidents of fuel theft have been there for several years, but the recent price hike of petrol and diesel has led to a sudden increase in such cases. Only large-scale thefts are coming to light as many ignore the loss of small quantities, they point out.

“In the case of motorbikes, it is very easy to disconnect the fuel pipe and drain the tank. In many of the previously exposed cases, the suspects were youngsters who wanted to find free fuel for their pleasure rides,” said Vineeth Mohan, an autorickshaw driver in the city. He said such youngsters were also found involved in bike-stealing cases.

Mainly vehicles parked for long hours or days in unguarded locations are targeted for draining fuel. According to police officers in various city police stations, they usually get a very minimal number of written petitions from two-wheeler owners to probe such cases. They also point out that the increased real-time camera surveillance in the city has managed to improve safety over many vulnerable locations.

Apart from fuel theft, isolated incidents of stealing the batteries and extra-fittings in heavy vehicles have also increased in unguarded parking spots in the city. In the case of premium vehicles, the main attraction was once the costly logos. The improved theft alert system in some of the premium class vehicles has, however, managed to repel the practice to a great extent.

West Kallada sets a goal of graduating all residents

Toddler drowns after falling into bucket of water