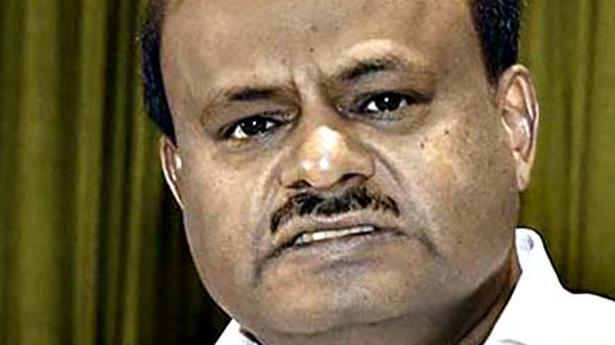 Former Chief Minister H.D. Kumaraswamy has alleged that the party which came to power chanting Sri Rama’s name during the campaign was busy ensuring Ravana rule in the State.

Speaking to presspersons at Kalasa in Chikkamagaluru district on Monday, Mr. Kumaraswamy wanted to know if Rama could be revered by wielding swords in public and by disturbing harmony among communities. “The State Government has no concern about the communal harmony being harmed in society. The harmony should not be disturbed to secure 150 seats for the BJP”, he said.

Commenting on Congress, Kumaraswamy said that the party forgot about the burning issues, as it was more interested in getting a BJP leader arrested.

He also appealed to the Chief Minister to convene a meeting of leaders of all religions to ensure peace and harmony in the State.

Mr. Kumaraswamy was in Kalasa as part of the party’s Janata Jaladhare yatre.

Use Infra Fund and subsidy on drones, farmers told

Samithi to lay siege to toll plaza this month