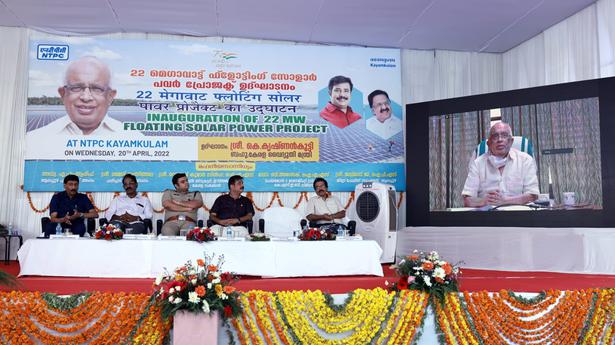 Speaking on the occasion, Mr. Krishnankutty said the feasibility of setting up hydroelectric projects in the State by NTPC like the one in Himachal Pradesh would be explored. He said the possibility of LNG firing would be explored instead of naphtha at the NTPC Kayamkulam plant.

Officials said the NTPC was planning to become a 130-GW company by 2032. It plans to augment its renewable energy portfolio to 60-GW by 2032.

The 22-MW plant is part of the 92-MW floating solar power project being set up by the NTPC at its Kayamkulam unit. The work on the Solar PV Power Station was awarded to Tata Power Solar (70 MW) and Bharat Heavy Electricals Limited (22 MW). The work on 70-MW is making progress and the NTPC hopes to commission the entire 92-MW by July 2022.

The floating solar system is being set up on the lake adjacent to the NTPC’s Rajiv Gandhi Combined Cycle Power Project (RGCCPP) at a cost of ₹465 crore. A total of 2.16-lakh solar panels are being mounted on floaters. Once fully operational, the Kayamkulam plant will be the second-largest floating solar power project of the NTPC after the 100-MW plant at Ramagundam in Telangana.

The Kerala State Electricity Board (KSEB) will purchase power from the floating solar station at ₹3.16 per kWh. An agreement to this effect was signed between the KSEB and the NTPC some time ago.

The KSEB had stopped drawing power from the 359-MW naphtha-fuelled RGCCPP since 2017 due to the cost. It led the NTPC to shift its focus to solar energy. The company is in possession of around 1,000 acres of land, which includes waterbodies suitable for setting up floating solar plants. In recent years, it commissioned a few small solar projects at the Kayamkulam site.