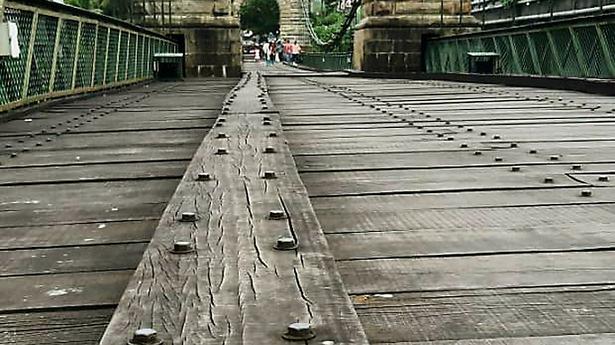 Extreme changes in climate following the floods of 2018 may be one reason accelerating the degradation of the Punalur suspension bridge, a protected monument and a prime tourist attraction in Kollam district.

The imposing structure constructed by Travancore king Ayiliyam Thirunal Rama Varma in 1877 was renovated with the sturdy ‘kampakam’ ( Hopea parviflora) wood in 2016. At present, a portion of the wooden platform has developed fissures and the Department of Archaeology will soon commence conservation measures to protect the structure.

“Kampakam tree is usually not vulnerable to sun or rain, but a range of factors, including temperature fluctuations, moisture level and changes in the evaporation rates of the Kallada river, can impact its durability. In normal course, it’s very unlikely for kampakam planks to develop cracks,” says E. Dinesan, director, Department of Archeology.

The 400-ft long 20-ft wide bridge across the Kallada river hangs on thick iron chains and its platform is made of wooden planks attached to steel bars. During its early days, the main purpose of the bridge was to curb the entry of wild animals from the nearby forest. Later, a parallel bridge was constructed in 1972 for regular traffic and it was declared as a protected monument in 1990.

The bridge was closed for renovations and repairs for considerable stretches of time since late 1980s. It was finally thrown open for visitors in 2016 after a long restoration process that continued for around 15 years. Since there was no substitute for kampakam, the logistical issues related to the procurement of wood was the main cause for delay.

While the department has already initiated steps to renovate the damaged wooden parts with treated kambakam planks, the District Tourism Promotion Council and Punalur municipality are exploring the possibilities of development of the bridge premises.

“We have a routine mechanism for monument conservation, and the plan for this year will be implemented shortly,” says Mr. Dinesan.

Punlaur, one of the hottest places in the State, had recorded extreme summers and winters over the years. “We are constantly monitoring the bridge and we have already got in touch with the Department of Archaeology. Since we have a steady tourist flow, we are also planning to beautify the nearby areas and build a park. Punalur municipality is keen on conserving the landmark monument,” says Nimmy Abraham, municipal chairperson. 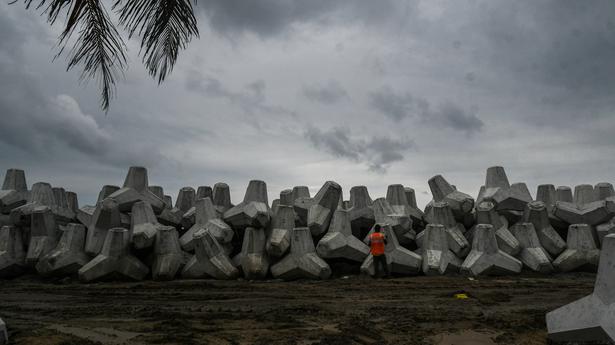