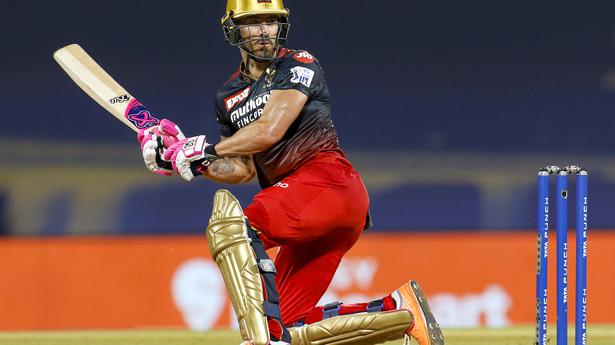 Faf du Plessis (96, 64b, 11×4, 2×6) and Josh Hazlewood (four for 25) combined to catapult Royal Challengers Bangalore to the second spot on the points table with an 18-run win over Lucknow Super Giants at the D.Y. Patil Stadium here on Tuesday.

After du Plessis powered Royal Challengers to a fighting 181 for six, Hazlewood had Super Giants in trouble early with his metronomic Test match lengths dismissing Quinton de Kock and Manish Pandey inside the PowerPlay.

Fresh from a century, K.L. Rahul (30, 24b 3×4 , 1×6) was off the blocks with a couple of elegant fours in the first over and looked in fine touch before he edged a delivery going down the leg-side to the wicket-keeper and punched his bat in frustration on his way back.

Krunal Pandya (42, 28b, 5×4 2×6), promoted to No. 4, also took off immediately with two consecutive boundaries off Mohammed Siraj before he miscued a pull off Glenn Maxwell in the 13th over with the required run rate threatening to touch 12.

Ayush Badoni started his innings with promise, shuffling outside the off-stump and lapping Siraj to the boundary for four.

However, moving across his stumps again, Badoni perished, edging a slower delivery from Hazlewood to Dinesh Karthik behind the stumps. Hazlewood then castled Marcus Stoinis (24, 15b 2×4 1×6) in the 19th over to dash any hope of a miracle.

Ealier, put in to bat, du Plessis bailed his team out of trouble after Dushmantha Chameera struck twice in the first over.

Anuj Rawat chipped a catch to mid-off before Virat Kohli guided a short of a good length delivery straight to backward point next ball, only to stare at non-striker du Plessis with a rueful smile and disbelief.

Walking in at seven for two, Maxwell raced to a 11-ball 23 before reverse-sweeping to a leaping Jason Holder, who held on to a one-handed stunner at short third-man.

With RCB reeling at 62 for four, Shahbaz Ahmed helped his skipper in the rescue act with a 70-run stand off 48 balls for the fifth wicket.

Du Plessis, who brought up his fifty off 40 balls, punished anything that was full, and seamlessly shifted gears after the landmark, reeling off 46 runs from the following 24 balls that he faced.

Dinesh Karthik cranked up the decibels in the crowd by smashing an attempted yorker by Avesh Khan over long-off for a six in the penultimate over.

Though Holder’s back-of-a-length deliveries outside off restricted the runs to four in the final over, RCB had enough on the board.