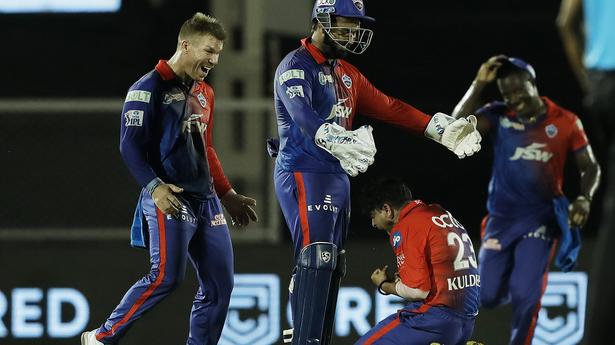 Delhi Capitals regained its winning touch by beating a listless Kolkata Knight Riders by 44 runs in an Indian Premier League match at the Brabourne Stadium here on Sunday.

After posting the highest total of the season — 215 for five — Capitals snuffed out Knight Riders’ challenge through superb bowling efforts from Kuldeep Yadav and Khaleel Ahmed.

Shardul Thakur followed his impactful innings of 29 not out with two wickets in the final over to terminate the Knight Riders innings at 171. Kolkata captain Shreyas Iyer, with a half-century, put up the only real effort.

Knight Riders needed an electric start. But Venkatesh Iyer flickered briefly and Ajinkya Rahane was all at sea. Khaleel snared both openers.

Shreyas and Nitish Rana added 69 for the third wicket for a mid-innings resurgence.

However, Kuldeep lured Shreyas out of his crease for Rishabh Pant to effect an easy stumping and it was as good as over when the spinner scalped three in his final over.

Roaring at the top

The dynamic pair of Shaw and Warner sent the Knight Riders fielders on a leather hunt, putting on 93 for the first wicket.

Shaw was off the blocks in a flash, punching the first ball of the match from Umesh Yadav for a boundary. Marginal errors from the pace bowlers were punished by Shaw, forcing Shreyas to summon his mystery spinners — Varun Chakravarthy and Sunil Narine — in the PowerPlay. But there was little reward.

Warner deposited Varun over deep midwicket for a six and then reverse-swept Narine for a boundary as Capitals scored 68 in the PowerPlay.

Varun cleaned up Shaw soon after he completed his fifty but it brought no respite as Pant went into attack mode quickly.

He clattered Pat Cummins over his head for a six and played his trademark falling sweep(s) to add 55 for the second wicket with Warner.

However, Shardul and Axar ended the innings in a flourish, clobbering Cummins and Umesh for 39 in the final two overs.