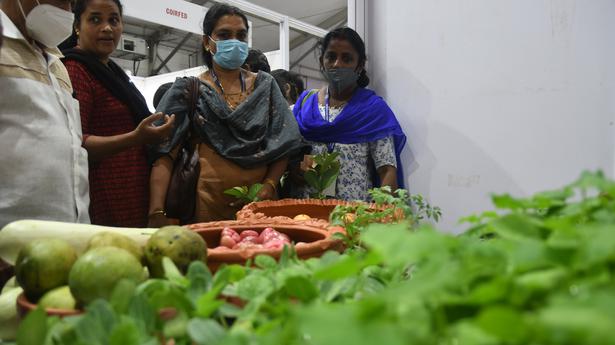 Special Correspondent
KOCHI
Chief Minister Pinarayi Vijayan on Monday said that the cooperative sector touched every aspect of life of society and it had great support from the people.
Cooperatives are seeing major changes now even as the movement had entered all areas of activities. He was inaugurating the eight-day Cooperative Expo-2022 at the Marine Drive in the city on Monday. The expo got off to a colourful start with a percussion ensemble by artistes led by Mattannur Shankarankutty Marar.
The Chief Minister, who inaugurated the expo online, also said the cooperatives had been able to withstand several negative measures against them.
V. N. Vasavan, Minister for Cooperation presided over the event. Industries Minister P. Rajeeve inaugurated the stalls that are the main attraction of the eight-day fete. V. D. Satheesan, Opposition Leader was the chief guest at the inaugural programme.
A pavilion spread over 60,000 sq.ft. has been prepared to house the expo, which comprises 210 stalls. These stalls have on display products from all the major cooperative institutions in the State. One of the major attractions of the expo is the 8,000 sq.ft. food court, which will showcase a variety of food items, including Kerala cuisine.
The exhibition is open between 9.30 a.m. and 8.30 p.m. The expo is offering discounts for products from cooperative institutions.
There will be seminars on various aspects of the cooperative movement during the days of the expo. Experts from various fields will present papers, which will be analysed by panels of experts, said the organisers.
The Mayor, MLAs and MPs from the district, District Panchayat President Ullas Thomas, District Collector Jaffar Malik and Kerala Bank president Gopi Kottamurikkal were among those who participated in the inaugural function.