Comedian Bharti Singh picked a dramatic, ruffled, maternity gown from the store for her maternity photoshoot

Comedian Bharti Singh picked a dramatic, ruffled, maternity gown from the store for her maternity photoshoot

Last week, when comedian Bharti Singh’s maternity photo shoot went viral, it also turned the spotlight on her mauve ruffled gown. It was picked from Coimbatore-based Artista Prop Shop, which sells and rents props, from baby outfits to maternity gowns for photoshoots.

“Our phones haven’t stopped ringing,” says 24-year-old Tania Rayan, who started the store during the second wave of the pandemic. Her Instagram page has jumped to 30,000 followers now. “We have so far delivered 8,000 orders across India and abroad, to places such as the US, Europe, Australia, and Canada,” she adds.

Tania says Bharti Singh’s photographer chose the frilly Ariana gown, which costs ₹12,500 and comes in shades of bottle green, burgundy, and caramel. “Though the design is minimalist, the tulle ruffles, which run up to 60 metres, give it a dramatic look,” adds Tania, who is also a photographer and vlogger.

With a growing customer base, especially in cities like Pune and Bengaluru, Tanya has hired a 10-member team to runs the store. Last month, she added two fully-equipped photo studios that can be used on rental basis for photoshoots with access to unlimited props and backdrops, photographic lighting, and outdoor spaces. Last August, she also launched an outlet in Chennai, which she describes as a ‘big moment’.

“When we started out, there were very few references. I roped in my friend K Asha, a fashion designer to help out. I followed some of the international photographers to understand the fabrics that work for such photoshoots. When well-known local photographers started buying our maternity gowns, our store got noticed. ”

Most of their gowns are made using four-way stretchable jerseys, cottons, synthetics, and netted fabric. “Then, we work on the texture, adding fluff and volume to ensure that it pops in the photos. For mermaid jersey gowns, we add long georgette tails,” says Tania, adding “and for Erica princess gowns, its the tulle frills that lend a magical look.” This exhibition in Chennai showcased rides and memorabilia from the past. Some dating back to the 1880s 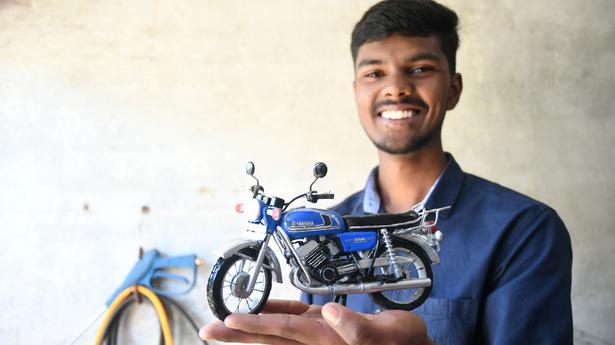 A miniature car and bike creator from The Nilgiris