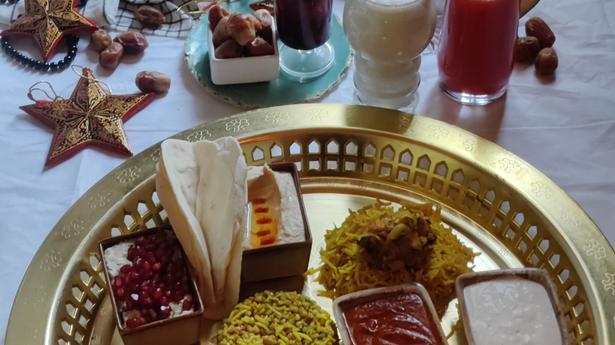 After two years of takeaway, this Ramzan, restaurants welcome diners with a range of innovative iftar menus, including vermicelli biryani, vegan gulab jamuns and of course a range of slow-cooked haleem

After two years of takeaway, this Ramzan, restaurants welcome diners with a range of innovative iftar menus, including vermicelli biryani, vegan gulab jamuns and of course a range of slow-cooked haleem

At Abids, the haleem is a luxurious blend of meat, spices, deeply caremelized onions and patience. The restaurant, which has been curating an thoughtful Iftar menu ever since it launched in 2016, offers a variety of meal formats. Try the buffet (Rs 650) serving lukhmi. spring rolls and samosas, followed by shawarmas and biryani. Or order one of their many iftar boxes, offering menus like ‘Shaan-e-Hyderabad (which includes nombu kanji, Mughlai chicken paratha and biryani) and ‘Aroma of Arabia’ (pita bread, hummus, Al Faham chicken, mandi, kunafa etc.)

If you are dining in, start with a bowl of haleem, still steamy and silky from 8 hours in a brick oven, then slice into the dramatic metre kebab, which stretches across the length of the table. Alternatively, just check out Abid’s bustling outdoor counters, which run from 3 to 7 pm, and curate your own iftar over cups of sulaimani tea and bowls of khubani ka meetha: jammy stewed apricots in cool dollops of sweet cream.

At Habibi, Chef V Manikandan and his team have been sending out meticulously curated Mediterranean flavours in Iftar boxes since April 3. After working in the UAE, Spain, Qatar and Switzerland, the chef has curated nine different types of iftar boxes. “Dishes are cooked over firewood and we use charcoal pit roasting as well,” says Chef V. Manikandan .

They have an interesting vegetarian menu, including a ‘green grill box’ (₹460, serves one), which has three varieties of grilled paneer, broken wheat cous cous, hummus and stuffed chocolate dates. The Gulf Sea box with harissa prawn, zaatar and olive fish, broken wheat cous cous and choco dates are popular this season. Try the Egyptian and Moroccan style hummus, as well as their wide variety of baklava.

This Ramadan, the cloud kitchen, Sahib’s, which is popular for biryani, has launched BeeVee’s Hot Kitchen in Velachery. They offer a family iftar kit comprising a menu that changes everyday and is announced on their social media handles one day ahead. The menu usually includes dates, drinks, cut fruits, nombu kanji (rice and lentil porridge), haleem, sandwiches, wraps, grilled chicken along with pita bread, fried snacks with dips. They also have options for early breakfast (Sahar) where one can order string hoppers, parotta, stuffed rotis and biryani, which can be ordered along with Iftar box as add on.

“Considering that fasting days are during summer, we have included sabja seeds in sherbat and agar agar in our desserts, as these are natural body coolants. We have also avoided using processed sugar and substitute it with jaggery to avoid sugar load,” says Muhammad ali, the proprietor.

Launched this year, the Iftar take away by Fabulous Lyfe by Soul Garden Bistro is a thoughtfully assembled treat for vegetarians. It includes samosas, peri peri fries, pita bread and hummus and a hearty tawa biriyani served with brinjal curry. Try the plant based cheekn (PBC), which includes a vegan drumstick . The drumstick has a hint of ginger-garlic, with a texture similar to shredded chicken, with mild spices, and the meat like chunks in the biriyani is shaped like mutton pieces, but made of soy, wheat gluten and maida. The taste and flavour leaves you wanting more. “We launched a limited vegan menu last year and due to an overwhelming response, we decided to offer it as Iftar take away this year in order to popularise mock meat concept,” says Jignesh Pujara, founder of Eko Lyfe.

The boxes are available only for take away, there is no dine in. For dessert there is a rich, satisfying bowl of vegan gulab jamuns made with soy and semolina.

After four years in Hyderabad, executive chef at The Trident Chennai, Vijay Shahi is busy training his team to make perfect haleem. “The nombu kanji that is most popular here in Tamil Nadu is the closest to the original Arabian style haleem. In Hyderabad, they have developed a different style of haleem where 90 per cent meat and 10 per cent of other ingredients are cooked together for prolonged period,. Wheat dalia is added to give the dish its unique texture,” says Vijay.

“Therapeutic spices ( khus roots or vettiver, roots of betel leaves, stone flower or kalpaasi) and aromatic spices ( cardamom, shahijeera, fennel) are infused in hot water and made into decoction and added gradually when the meat is simmering. Rose petals are also added for aroma. The meat gets cooked in the fat that oozes out while cooking. As a final touch, onions caramelised in ghee are used as garnish., along with a dash of lemon,” says Vijay.

@The Trident, A portion of haleem is priced at ₹ 850. Take away and dine in at Samudra restaurant. Available from 11 am till midnight during Ramadan month. To book, call: 8383916586

At this 60-year-old iconic restaurant, Iftar boxes were launched six years ago. “We realised that everyone likes to try Iftar menus, and therefore we ensure there is a variety of fare,” says Sadique M. Partner, Hotel Samco, Alwarpet. Mandi is a speciality during the season. “It is a Lebanese rice preparation, where basmati rice is cooked with the fat from the meat. No masalas are used, but aromatic spices are used minimally to lend a flavour to the basmati rice,” he says. The Samco Iftar box comprises Mandi rice, mutton samosa, barbeque chicken, haleem, parotta, and chicken gravy, dessert, dates and juice. “As add on for an extra cost, one can order our signature vermicelli biriyani, idiyappam and paya or other popular items on the menu,” he says.

The Bay Leaf, Gopalapuram, Velachery and chetpet. Iftar box packed and sealed in an 8 partition container to serve one. Veg iftar kit- ₹ 369 +taxes and non veg at ₹ 419 plus taxes. Ambur biryani and chicken samosa and tikka kebab. Avaialbe from 4 pm to 8 pm. Phone: 2811 4557

The Park, Nungambakkam. This year they offer jackfruit haleem and falafel wrap for the vegetarian and lamb adna kebab and chicken shawarma for non vegetarians. ₹ 599 ffor veg and ₹ 699 for non veg, serves one. Phone: 2824 6000