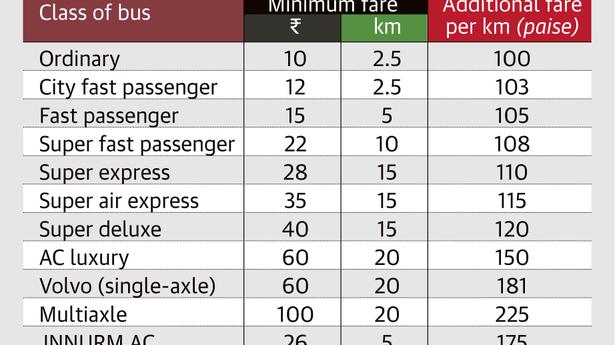 The State Cabinet on Wednesday approved a proposal to revise bus-auto fares considering the sharp rise in fuel prices and related costs.

Although the bus fare has been revised, it will reduce the fare on many routes as the deficiencies in the fare stage have been rectified, said Transport Minister Antony Raju. The charge has been modified nominally so as not to be a huge burden on passengers.

While the fare on ordinary buses is slightly higher, the fares on many super class buses will be lower than the present fare. Ordinary minimum charge has been revised from ₹8 to ₹ 10 and km rate from ₹ 90 to ₹1 per km, while the minimum distance of 2.5 km is unchanged. The city fast minimum fare is ₹12 and the km fare is 103 paise. Only a slight change has been made in the ratio of ordinary fares to higher class buses. The minimum fare on fast passenger is ₹15 and the km charge is 105 paise.

There is no minimum charge increase for super class services from super express onwards. The minimum fare for a superfast bus will be ₹22 and the fare will be 108 paise per km.

Although the km rate has been increased to 110 paise in super express buses, there will be no significant change in the bus fare as the minimum charge has been fixed at ₹35 and distance increased to 15 km.

There is no change in the rates for single axle air conditioned, high tech, and Volvo single axle buses. The current minimum charge for low floor non-AC generic buses has been reduced from ₹13 to ₹10. The rates for city circular and city shuttle will be the same as ordinary. The Minister also said that with the rectification of the deficiencies in the fair stage determination of KSRTC buses, the complaints of the passengers have been resolved. KSRTC to launch end-to-end services to Kochi from capital Dr. A. Gopalakrishnan passes away