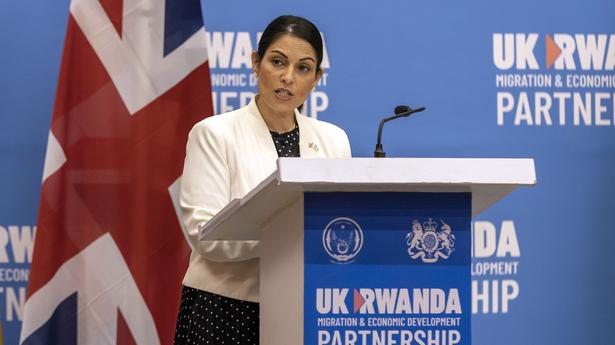 UK Home Secretary Priti Patel on Monday fought back at critics who have voiced their concerns over a new immigration strategy that will see illegal immigrants entering the country being flown out to Rwanda.

The Indian-origin minister has put her personal political heft behind the initiative as it emerged that she had issued a “ministerial direction” to push the plan ahead as a means to tackle people smugglers and criminal gangs. However, the plan has attracted strong criticism from senior religious leaders such as the Archbishop of Canterbury and also some members of Parliament from within the governing Conservative Party.

“We are taking bold and innovative steps and it’s surprising that those institutions that criticise the plans fail to offer their own solutions,” Ms Patel writes in The Times, in a joint article with Rwandan Foreign Minister Vincent Biruta.

“Allowing this suffering to continue is no longer an option for any humanitarian nation,” they add.

Over the weekend, Archbishop of Canterbury Justin Welby accused the government of “subcontracting our responsibilities” and saying it cannot “stand the judgment of God”. He was joined by the Archbishop of York, Stephen Cottrell, who said the policy was “depressing and distressing”, adding: “We can do better than this.” They are joined by several refugee charities and Opposition MPs, who are also concerned about the plan being “unworkable”.

Among the concerns voiced include Rwanda’s own human rights record, but in their joint article, Ms Patel and Mr Biruta said Rwanda “ranks as one of the world’s safest countries” and has already accommodated 130,000 refugees from multiple countries.

The scheme, dubbed a world-first partnership of its kind, was announced by British Prime Minister Boris Johnson last week. It will see migrants who make dangerous or illegal journeys, such as by small boat or hidden in lorries, being relocated for their asylum claim to be processed in Rwanda. Those whose claims are accepted will then be supported to build a new life in what the UK described as one of the fastest-growing economies.

Under the partnership, the UK is investing 120 million pounds into the economic development and growth of Rwanda. Funding will also be provided to support the delivery of asylum operations, accommodation and integration, similar to the costs incurred in the UK for these services.

“We have signed a world-leading Migration Partnership with Rwanda which can see those arriving dangerously, illegally or unnecessarily into the UK relocated to have their claims for asylum considered and, if recognised as refugees, to build their lives there,” Ms Patel said during a visit to the Rwandan capital of Kigali last week.

“This will help break the people smugglers’ business model and prevent loss of life, while ensuring protection for the genuinely vulnerable,” she said.

The scheme will initially focus mainly on single men arriving in the UK on small boats from across the English Channel or hidden in lorries. The UK government has warned that the crisis of illegal immigration through such dangerous routes has hit dangerous levels, with over 28,000 migrants crossing the Channel last year alone. Steel Man of India, Jamshed J. Irani passes away at 85